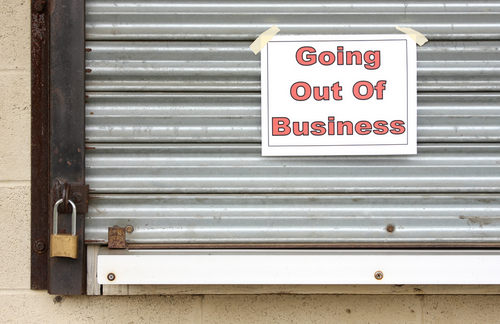 Non-compliance with stringent business laws, lack of funding, and insufficient growth are causing the Indian business ecosystem to take a hit in terms of successful businesses. According to the Monthly Information Bulletin on Corporate Sector, of the 17,37,253 companies registered on 28th February, 2018, 539,202 companies have closed, while 10,501 companies were dissolved, and 495,711 were struck off. According to Business Standard reports this doubles last year’s number, which was approximately 2.38 lakh, according to the Ministry of Corporate Affairs (MCA).

Under section 248 of the Companies Act of 2013, many companies have had to shut up shop. According to the Act, if any company was not able to commence business within a year of being incorporated, or the company lacks sufficient capital, and the company has neither done business for two years nor has submitted to be classified as a dormant company, then the Registrar of Companies (RoC) has the right to remove the company’s name.

538,000 companies closed down till this year January, and of these, almost 495,000 were in violation of the Companies Act of 2013. Increasing regulatory compliance and inability of companies to get bank credit have been the reasons cited by account professionals for this massive shut down of companies. Also, certain companies have defaulted on loans, while some shell companies have been cracked down, leading to companies going automatically out of business. It is also interesting to note that, according to the MCA bulletin, 111 companies are lying AIPG or ‘Active in Progress’, which means they have 21 days to complete its pending annual filings.

Business Standard quoted Mamta Binanai, a resolution professional and company secretary, “These companies are mostly defunct as they have not complied with regulations for the last three or four years. With the new companies law the compliance norms have been made stringent. Often the companies also do not want to disclose a lot of information. Many of the firms might be in the non-performing asset category. Also, due to a crackdown on shell companies, a large number of these have ceased to exist.”

The latest Companies Act brings with it strict norms, which are rendering many companies as non-performing assets. The companies that have gone defunct are refraining from revealing information. Many of them have been referred to the National Company Law Tribunal (NCLT).

The startup ecosystem of India has also seen a hit. The number of startups launched in 2016 were 6000, whereas in 2017, it came down to a meager 800. Funding and growth problems have led to a slew of defunct startups such as Stayzilla, Finomena, Task Bob, Yumist, and Tolexo.

It’s coming up to 4 years that the government’s Make in India program has been in effect and the recent figures released by this report will need further analysis as to whether the protectionist measures are doing more harm than good. It remains to be seen whether Indian businesses can gear up and pull themselves out of this trend in 2018.