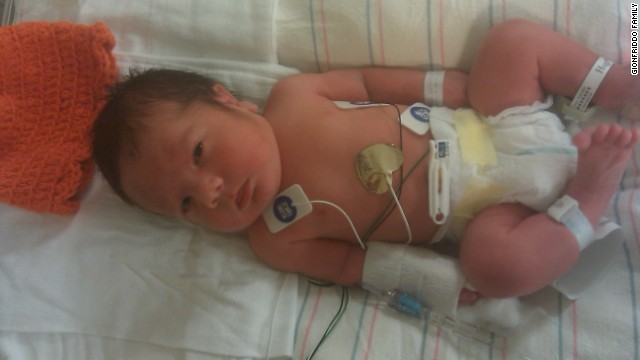 We have been listening to a lot of stories surrounding the 3D printers however, this one is definitely a medical breakthrough. Bryan Gionfriddo, the 6 month’s old father,  knew something was terribly wrong. He and his wife, April, were at a restaurant when they noticed that their baby, Kaiba, suddenly couldn’t breath. He was turning blue. Panic set in, as his father pumped the baby’s little chest. The doctors said Kaiba probably just breathed something in, but it happened again a couple of days later. And it continued to happen every day.

The tests and consequent reports showed that the baby was suffering from bronchial malacia, a rare condition involving a blockage that affects respiration. The doctors needed a regenerative medical treatment immediately, otherwise Kaiba wouldn’t survive. Ideally, this would involve inserting a splint, to hold the passage open and hopefully allow the tissue to grow and heal around it properly. So this is what doctors wound up doing — using a splint made by a 3D printer.

The FDA still has not approved this for use in humans, but time was of the essence, so the doctors raced to get a special dispensation for this radical approach. In other words, when Kaiba went under the knife to have his 3D-printed splint surgically implanted, he became the first human subject to test this procedure.

The baby was transferred from Akron Children’s Hospital to C.S. Mott Children’s Hospital at the University of Michigan, where treatment commenced. First, he was imaged, so the technicians could get extremely accurate dimensions, and then those measurements were used to create a computer model to act as a blueprint. Finally, the printer went to work. It took about a day to output the tiny, custom splint that the doctors would implant.

The printer material was polycaprolactone (PCL), a powder that can be used to form a malleable substance often used in other medical applications. PCL has been used as filler to close gaps in the skull left by brain surgery, and in this case, it would form Kaiba’s splint. The material is ideally suited to medical applications because it’s strong enough to offer support, yet degrades on its own over time — presumably after the organ has healed. This means there’s no need to operate again to remove it. It simply breaks down, and then the body excretes it. Doctors say this PCL splint will last for three years before it disintegrates. By then, they hope, the baby’s bronchus will be strong and healed in the proper position. This solution may not be as cutting-edge as stem cell research and human cloning, but the medical field’s use of 3D printing has the potential to save innumerable lives. Not only are splints possible, but so are 3D-printed organs, both organic and bionic. And for at least one family, the technology is nothing short of a miracle solution. So far, things are looking good. Kaiba is at month 15 now, post-surgery, and able to breath on his own just fine.

“It’s magical to me,” says Dr. Glenn Green, the University of Michigan pediatric otolaryngologist who performed Kaiba’s procedure. “We’re talking about taking dust and using it to build body parts.”