No, we aren’t doing game reviews but if you are a true lover of tech, then you ought to love James Bond. Bond,  James Bond! Rings a bell? Activision, the popular gaming company, has announced that its latest video game 007 Legends is available to purchase. As the name suggests, the game is based on the five classic Bond Movies. The Bond Films that the video game is based upon include Goldfinger, On Her Majesty’s Secret Service, Moonraker, License to Kill, Die Another Day, and the upcoming film Skyfall. The cover of the game shows the Bond Villain, Jaws. People are hoping that  Jaws will be  a playable character and figures heavily into the game.

The video game will be launching across Europe on October 19 and  in Australia on October 31. India should follow soon enough. From what the description says, the missions go along each of the classic movies. However, the sixth mission, based on the 6th movie “Skyfall”, is unlockable . This movie has a release dated next month.

The game promises to equip players with “state-of-the-art spy gadgets, an arsenal of weapons, including Bond’s signature Walther PPK, and sleek vehicles” and take them to various exotic locations.

The Skyfall mission has been offered as a downloadable content and its availability is timed to coincide with the with the release of the movie. PlayStation Network subscribers will be able to access the Skyfall mission on November 9, and the mission will hit Xbox Live on November 20. In each of the six missions, the game offers multiple levels and allows players to use spy gadgets, different weapons, vehicles, and  more. The game will be offered for the Xbox 360, PS3, Wii U, and Windows computers. The Windows version will be available on Steam on November 2.

So how many of you are excited? 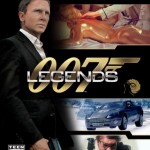