According to a tweet by CNBC, Adobe CTO Kevin Lynch quit on March 18th to move on to Apple. Adobe has confirmed in an SEC filing that Lynch departed the firm. He left the company yesterday (March 18) to pursue other opportunities:

In a first response, an Adobe spokesperson told All Things D, “We will not be replacing the CTO position; responsibility for technology development lies with our business unit heads under the leadership of Adobe CEO Shantanu Narayen. Bryan Lamkin, who has recently returned to Adobe, will assume responsibilities for cross company research and technology initiatives as well as Corporate Development. We wish Kevin well in this new chapter of his career.”

Apple spokesman Steve Dowling confirmed the hire, and said that Lynch will join Apple as vice president of technology, reporting to Bob Mansfield, SVP of Technologies.

According to inside sources familiar with the situation, Lynch was aspiring to take the CEO spot in Adobe. Since Shantanu Narayen is not leaving that spot anytime soon, he preferred moving to Apple where, although he doesn’t have a very senior position, but he does have an important one where he’ll be tasked with coordinating the company’s hardware and software teams.

Lynch was a strong defender and advocate of Adobe’s Flash while Apple, under Steve Jobs, kept moving away from Flash. Seems Kevin Lynch has changed his mind now. 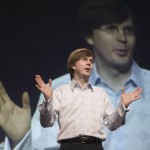