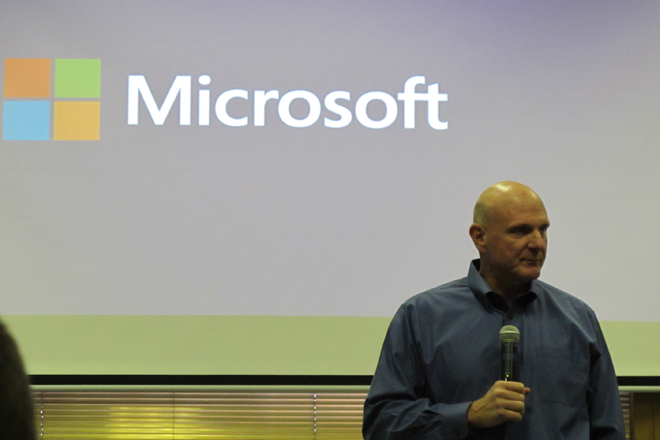 Microsoft is working hard to turn developer attention to Windows 8. Just a month away from the operating system’s public release, CEO Steve Ballmer took the stage at a private event in RocketSpace’s San Francisco space on Tuesday to speak to developers and VCs about Windows 8 software and hardware. Ballmer and Windows CFO Tami Reller showed off several Windows 8 devices, including the highly anticipated Surface RT tablet, in an attempt to get the developers in attendance fired up about its upcoming products.

Well. Kind of. For such a rah-rah event meant to get developers excited to start building for Windows 8, Ballmer and the rest of the Microsoft team spent very little time talking about or showing off the Surface tablet, arguably Microsoft’s most exciting product. The tablet is due to launch at midnight on Oct. 26, at the same time as Windows 8. Yet the company has not let people have much hands-on time with the Surface and its innovative Touch Cover.

This was no exception. In the hands-on time after the event, the Surface was missing from the product table, where several other Windows 8 tablets and ultrabooks were available to test and examine. The most Surface interaction Microsoft allowed came when Ballmer threw a Touch Cover to a developer in the front row.

Ballmer and Reller kept light on Surface details, focusing on the same specs and features that the company has already made public. The two highlighted the Touch Cover and the kickstand, which elicited whistles and applause from the audience. When RocketSpace founder and CEO Duncan Logan asked about Surface pricing, Ballmer remained vague.

“Some,” Ballmer responded. “We’ll release pricing before we ship. We’ve been clear that’s in the not too distant future, but not today.” Previously, Ballmer had hinted at a Surface RT price range between $300 and $800. Even though Ballmer did not have much to add about Surface, he did make several promises to developers in the room thinking about building on Windows 8. Ballmer pointed to the large Windows 8 market as the main attraction to create apps for the upcoming system.

“There will be customers coming and looking for apps. That I can assure you,” he said. “If 400 million PCs get sold in a year, at least two-thirds get sold in the Windows market. That’s 250 odd million, plus whatever we get in the consumer upgrades.”

As for whether Windows 8 is a lucrative option for developers, Ballmer was not shy to suggest that there’s a large financial opportunity in creating apps. “It’s going to create a heck of a lot of opportunity for folks in this room to make millions,” he claimed.

Another possible enticement for developers is the tight integration between Windows 8 and Windows Phone 8. Ballmer did not spend much time discussing the mobile platform, though he did tell the audience that “it’s really important if you’re writing a next generation application targeting Windows 8 that you know that you’re cross platform, of course, that you’ve got a kissing cousin, a buddy, to show off the best of your work in the phone form factor.” Windows Phone currently has around 3-percent of smartphone market share. Microsoft is making huge changes with its upcoming product lineup, to be sure. But the question is whether developers will see the same opportunity Microsoft sees in both Windows 8 and Windows Phone 8, and start creating apps for the two platforms. Microsoft is teaming up with top-tier developers — Hulu showed off its Hulu Plus Windows 8 app at the event on Tuesday — but the ecosystem will depend on much more than big names to succeed. It needs nice apps and networks to get on board too.

“For what it’s worth, we are all in,” Ballmer assured the crowd. “This is our most important set of products: Windows 8, Surface, Surface Pro, Windows Phone 8.”

It was, almost, a plea. As he wrapped up, he promised to see everyone again. “It’s all hands-on deck. I suspect I’ll spend more time in the Valley in the next month, two months, three months than at any time since before I dropped out of Stanford to go on out to Microsoft because there’s just so much that needs to be done.”