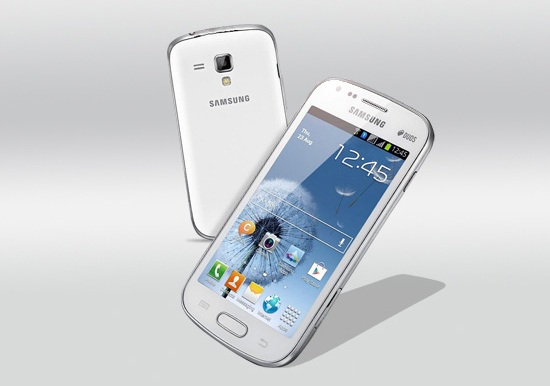 After Apple, Samsung is the most respected smartphone brand in the world today. There are actual fan boy wars between the fans of Samsung and Apple. For those who do like Samsung, I have created a list of the best Samsung mobiles in every price range if you are looking out to buy one of them. After the huge success of Champ series from Samsung, they have come up with something called the ‘REX’ series to tackle the new threat to its sales from Nokia Asha phones and other low end Android handsets from local brands. From the 3 phones launched in the REX series, this is the most sensible buy as it has a 3 inch capacitive touchscreen with a resolution of 320 x 240 pixels. It also has a basic 3 MP camera without flash but can record videos. On the connectivity front, it has dual SIM card slots which are compatible with GSM networks and can be used simultaneously. It also has Wi-Fi n, Bluetooth 3.0 and USB Host functionality. It has 20 MB of internal storage space while Micro SD card can be used for expanding the storage for up to 16 GB more. It is 11.9 mm thick and has a 1000 mAh battery which can last over a day or two of normal usage. The Samsung REX 80 price is set at INR 4,800 in the market today. The Samsung Galaxy Music Duos is an entry-level Android smartphone from Samsung which is priced at around INR 8,300. This is a dual SIM phone with Android 4.0 and TouchWiz Nature UX on top of it. It has a 3 inch screen (320 x 240 pixels) and a 3 MP camera with autofocus and VGA video recording. It runs using a single-core 850 MHz ARM Cortex A9 processor with 512 MB of RAM. There is 4 GB of internal storage and can be expanded using a micro SD card slot for up to 32 GB. On the connectivity side, it has quad-band HSDPA on both of its SIM card slots. It has Wi-Fi n, Wi-Fi Direct, DLNA, Bluetooth 3.0, A-GPS and 3.5 mm audio jack. It is focused towards music aficionados and comes with large & loud dual speakers at the front. It is quite thick and 12.3 mm and weighs 106 grams while its battery is rated at 1300 mAh. The Samsung Galaxy S Duos is one of the most selling smartphones today. It is a mid-range dual SIM Android smartphone from Samsung. It has a 4 inch LCD capacitive screen with a resolution of 800 x 480 while the camera can shoot pictures in 5 MP resolution with autofocus and LED flash. The VGA front-facing camera can be used to make video calls and self-portraits. It has a modest 1 GHz Qualcomm Snapdragon MSM7227A processor with 768 MB of RAM and 4 GB of internal storage. The device comes with Wi-Fi b/g/n, Bluetooth 3.0, A-GPS, Micro USB 2.0 and 7.2 Mbps HSDPA. The design is very similar to the Samsung Galaxy S3 and looks are quite attractive. With 10.5 mm thin and 1500 mAh battery, it can easily last over a day of normal usage. This phone had a recent price drop and is now selling for around INR 12.5K which makes this phone a steal. Still one of the best-selling handsets of 2012, the Samsung Galaxy S3 has an HD Super AMOLED display with a pixel density of 306 ppi which makes text easier to read without any jagged edges. The phone runs on Android 4.1.2 JellyBean with TouchWiz Nature UX from Samsung. It uses a quad-core ARM Cortex A9 based processor with Mali 400MP GPU to support heavy games with ease. It has 8MP rear camera and 2 MP front camera and both can do HD video recording. It has one of the best cameras out there when it comes to still images. It has 1 GB of RAM for smooth multitasking and 16/32 GB of internal storage while micro SD card slot can be used to expand the storage. All the connectivity options including Wi-Fi n, Bluetooth 4.0, MHL Port & Wi-Fi Hotspot. The Samsung Galaxy S3 has had a recent price drop and it is now priced at a very attractive price of INR 27K. The best-selling premium Android smartphone in India, the Samsung Galaxy Note 2 has a quad-core processor and a 5.5 inch screen (1280 x 720 pixels, 265ppi). There is an Exynos 4412 processor clocked at 1.6 GHz processor coupled with 2 GB of RAM which takes up all the multitasking and heavy processing with ease. The Mali 400MP GPU is one of the best graphics processors around and gaming experience is absolutely smooth. There is 16/32 GB of internal storage which can be expanded to an extra 64 GB through a micro SD card slot. There are 2 cameras on this phone; 8 MP autofocus camera with LED flash at front and 2 MP camera at the front. There are some nice additions and effects in the camera which help in taking very clear pictures and videos. A user can even click photographs while shooting full HD 1080p videos at 30 frames per second. On the connectivity side, it has all the features that you could think of except Miracast, of which a Samsung clone is present which is named as ‘AllShare’. It has a dual-band Wi-Fi a/b/g/n, Bluetooth 4.0, Wi-Fi Direct, Wi-Fi Hotspot, GLONASS A-GPS, Micro USB 2.0 (which also doubles up as Micro HDMI when connected through an adaptor) and a 3.5 mm audio jack. This is the ultimate phone from Samsung as of now, until the Samsung Galaxy S4 comes out on March 14th at an event by Samsung. The Samsung Galaxy Note has a price of INR 33K as of now and is expected to fall after the release of the Samsung Galaxy S4.