Bill Gates is once again the world’s richest person. The 57-year old co-founder of software technology giant Microsoft recaptured the title from Mexican investor Carlos Slim yesterday, according to the Bloomberg Billionaires Index, as the software maker hit a five-year high.

Carlos Slim’s America Movil, the largest mobile-phone operator in the Americas, has dropped 14 percent this year after Mexico’s Congress passed a bill that could quash the billionaire’s market dominance. That’s helped erase more than $3 billion from the 73-year-old tycoon’s net worth.

“When they’re talking about reform in a country that’s generally poor, and the guy shows up No. 1 on the list — not a good thing,” said Greg Lesko, managing director at New York-based Deltec Asset Management LLC, which oversees $750 million and has an “underweight” position in Slim’s flagship company. “He’s had a pretty good monopoly situation in Mexico, and the Mexican cellphone user has been paying more than he should. We applaud it for the country.” 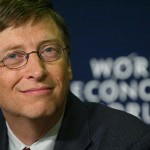