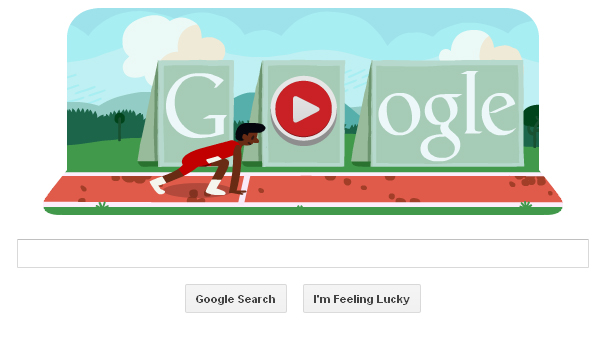 It is not only watching the Olympics at work that bosses across the world need to be worried about, on Tuesday they may also be fretting over employees competing against each other in the playable London 2012 hurdles Google doodle, tippity tapping away on their keyboards.

Just yesterday, we were thinking that Google Doodles have been less than what was expected of them this Olympics. But the twelfth doodle that Google has posted during the London 2012 is easily Google’s most fun Olympic doodle ever.

The interactive doodle lets you participate in a hurdles race (though you’ll be the only runner on screen) and use the left-right arrow keys to run and the spacebar to jump over the 10 hurdles in the race.

Once the race is over a score (in seconds) is displayed on the screen and also gives a star rating. An armchair hurdler managing a score lower than 11.8 seconds will get a three-star rating. Users can also share their Google armchair Olympic hurdles achievement on Google+.

Google London 2012 hurdles doodle shows a 110 metres men’s race with 10 hurdles. The World Record in the event is 12.87 seconds and the Olympics Record stands at 12.91 seconds.

The Google London 2012 hurdles doodle is in the shape of a laptop, perhaps also indicating that the game can only be played on computers with keyboards. The doodle appears only as a static image on mobile Web browsers.

When Google celebrated the 30th anniversary of Pac-Man  game with an interactive doodle, that allowed users to play Pac-Man right on the Google home page led to, according to analysts, a loss of $120 million to the British economy. The innovative doodle that Google put up for the country and jazz guitarist, songwriter and inventor Les Paul  resulted in $268 million in lost productivity, according to technology website ExtremeTech.

How much will this one cost? Also, do post your scores here. Lets see who comes out as the best.