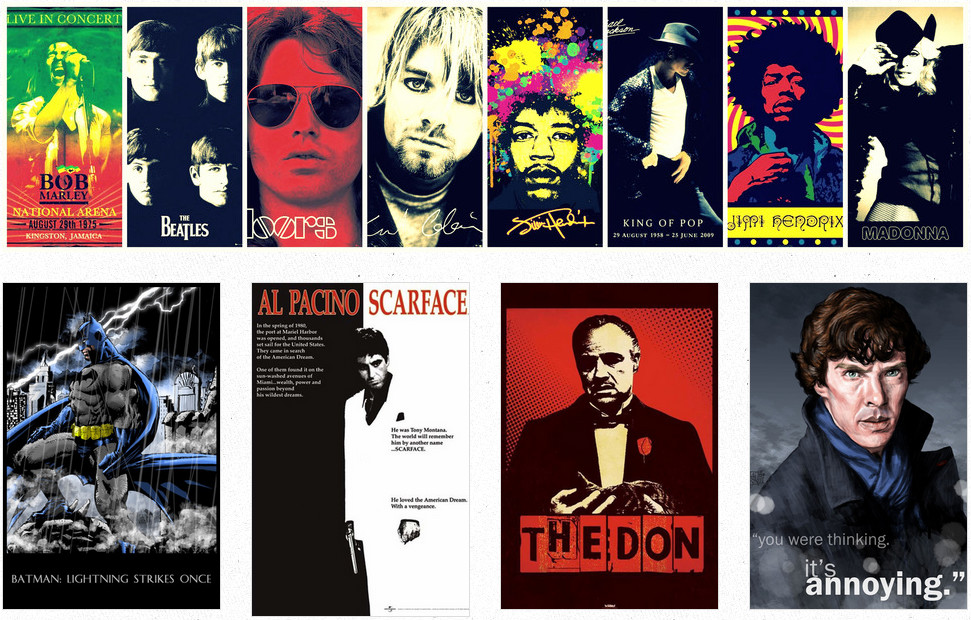 A house and having your own little room in the house is the most important and loved place for any human being. I believe – every person deserves his own space. When you acquire your own personal room, apartment or a complete house for yourself, don’t just let it stay as it is with plain colored walls as you had bought. Give it some personality.

We found Carmocrat, one cool little startup that wants to give life to your house, room and apartment where ever you reside and bring it more closer to being you by providing one simple solution, quality frames and posters.

Yes, you read it correct, they make finely printed, tenacious sound quality, frames and posters. And the best part about having frames or posters, they can be comfortably afforded even by a teenager’s pocket, no extra man powered required, no dust or mess to clean up. Just hang or paste them up and give some life to your walls and vigor to your space.

We had the opportunity to get into conversation and quiz Rohan on Carmocrat, the story behind it and plans going forward.

Tell us the story behind starting Carmocrat, Why posters?

One of the founders, Mohit Verma, did his undergrad at Georgia Tech, where he came across AllPosters.com – a website that sold posters of popular movies, TV shows, music bands, sports teams, art reproductions etc. That’s where the idea came into his mind.

When he returned to India he started working in a plant in the industrial engineering / process optimization line where he met his to be co-founder Kriti. Within a year he realized this was not his calling. And the more he discussed his idea with Kriti, the more they felt that venturing into uncharted territory gave them the freedom they were looking for.Thus Carmocrat evolved into a tangible idea.

We were founded on the idea of individualism. Today’s youth is very aware of their identity, of the image they project through their clothes, their accessories, their language, even their Facebook page. Everything is about telling the world who I am as a person.

Taking this idea forward we realized that people have limited avenues of self-expression when it comes to their walls – whether at home or in college hostel rooms. Thus Carmocrat’s mission was born – Cover The Walls With Your Identity.

We want posters to not just cover up the walls of children with their favorite mean machine, WWE superstar or football player but we want to cater to the audience who would enjoy Van Gogh but would rather just shell out 400 bucks for an excellent reproduction of his famous artwork.

Imagine conveying your thoughts and ideas within a moment without saying a word. That’s the idea we are working on.

There are already well-known names in the business, how would you describe Carmocrat’s USP?

When we launched in August 2012, there were only 3 players in the online market – Buzzingaa (no longer operating), PosterGully and Flipkart. At the time, we were a new player in a fairly under served market.

Things are different now. The entire landscape has changed, with the entry of the bigger e-commerce players like Snapdeal, Jabong, Homeshop18 etc into the segment. That being said, our USP revolves around:

We have collaborated with a few designers to offer exclusive content in minimalist and caricature posters. Brands like Devi8, BecauseFuckThat and Avik offer a wide variety of posters in different categories which enable us to offer diversified content. We also have an in-house brand called Veritas, which enables our creative side while giving the new age customer a product that is not available anywhere, adding to the uniqueness quotient of our brand.

Apart from posters do you plan to diversify to other items, like T-shirts, Keychains or badges?

Yes we do plan to diversify to merchandise such as stickers, keychains and badges. We’re working around issues such as shipping and licensing for the same and should launch soon.

Have you received any funding or is Carmocrat Bootstrapped?

We currently have not received any seed / angel funding but operate out of our initial investment and cash flow generated from operations.

How has been the response so far?

We have recently marshalled our resources towards SEO, which has led to an increase in online orders. Since inception (Aug ’12), we have sold over 850 posters, majority of the sales have happened over the last 6 months.

We have also seen a greater shift towards custom designed posters, which now account for 20% of our sales.

Do you also take orders to create custom posters for corporates and companies?

We do plan to take orders from corporates, which we believe will mostly involve motivational posters. We currently have a sizable offering for the same, marketed under the Veritas brand. We are adding to this collection as well, and will offer both design and printing services to companies in the near future.

Is the printing done in house or have you tied up with a vendor?

Our licensed posters are imported directly from two content management agencies based in the UK. They have tie-ups for content, which ensures that there are no legal or ownership issues on our side. For the custom posters, we use a third-party vendor for printing services.

Shipping and Logistics is also an important part. How do you manage that? Have you partnered or tied up with some services?

Logistics is probably the most important step in the entire e-commerce process. We initially had some teething issues regarding our shipping systems. Now, we have contracts with 2 separate vendors that ship packages pan-India, and we have managed to reduce shipping time to within 2-3 days of us handing over the shipment to the courier.

Tell us something about the team behind Carmocrat.

Graduate from Georgia Tech, USA, with his Bachelors in Industrial Engineering. Upon completion he realized that the cushioned lifestyle of an Indian Engineer in the US wasn’t his true calling. His first job in India, in industrial engineering made it all the more evident that working under someone was just not his thing. Eventually came up with the idea and the execution for Carmocrat.

Mohit is a Manchester United addict, a Chocolate gorger, an avid sports fan, moviegoer and a hopeless romantic.

Completed her bachelor’s degree in Economics from Miranda House, Delhi University. Being a non-traditionalist who likes to take the road less taken, she learnt Spanish to broaden her cultural palate and finally joined Trident Group in the role of a strategist, mainly concerned with the analytics of the Yarn division while also being a part of the core Branding team for the company. A coffee with Mohit and it was decided that she will be Carmocrats’ co-founder.

Kriti is a pet lover, a complete foodie and a nerd with OCD.

Graduated as a gold medalist from the Delhi College of Engineering, with an engineering degree (yes yet another engineer, we’re an extremely engineer heavy organization it seems). First job was as an investment banking analyst at Credit Suisse in Mumbai,  worked in the Technology, Media and Telecom industry coverage group for two and a half years. Latest addition to the team, joining Carmocrat in December 2012. Looks after finance, operations, product sourcing and business development. Also the official spokesperson for the company. Rohan and Mohit were classmates from DPS Vasant Kunj.

Favourite posters: V For Vendetta – Cover (have a framed one on my wall!), Superman – Logo, Batman – Lightning, Homer – Scream From Left to Right – Rohan, Mohit and Kriti – Team Carmocrat

What are your future plans for Carmocrat?