As Delhi gains an increasingly bad reputation of being unsafe for women, Delhi-based startup Leaf Wearables provides a solution with SAFER, a wearable smart safety jewelry for women. Rattled and shocked by the Nirbhaya rape case, a group of boys from IIT Delhi and Delhi Technological University came up with this technological innovation that has won them accolades all over the country and abroad.

SAFER, which was developed under project ‘Guardian’, won an Ericsson Innovation Award, leading to the launch of Leaf Innovation Pvt. Ltd in February 2015. SAFER is a smart safety device, which can be used to trigger alarm and send signals to pre-identified phone numbers in case of emergency. SAFER works on Bluetooth low energy and hence, coordinates with the “SAFER by Leaf” app on the user’s smartphone. 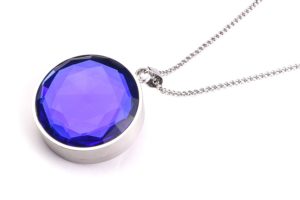 To use SAFER, all the user has to do is press the device twice to send emergency alerts with location to guardians. The device also shares live location with loved ones while travelling and helps in navigating to the nearest hospital or police station. The device can be fully charged within 15 minutes using a normal Micro USB, and a full charge lasts for more than 7 days with normal usage.

Ayush Banka, one of the co-founders and the Director of Product and Research in Leaf Wearables, spoke to The Tech Panda, reminiscing the journey from attempting to create solar Wi-Fi cities to becoming a trusted brand in wearable safety devices.

24-year old Banka, who comes from a technology background, completed his B.Tech in electronics and communication from New Delhi. While he developed an interest in electronics by tinkering with hardware and electronics, he couldn’t ignore the fact that he came from a business background.

“I was sure that I wanted to start my own venture but had no idea when and how it was going to start. In college, I met my co-founders, Avinash Bansal, Chiraag Kapil, Manik Mehta, and Paras Batra, and we clicked on the same idea of doing something that can impact a huge audience,” says Banka.

In the third year of college, while going through internships abroad in places like Singapore, the co-founders were inspired by two things they saw, the startup culture and the free Wi-Fi. The group of youngsters already connected internet with more productivity and innovation, and returning to India, they began thinking of using solar energy to garner Wi-Fi, which could be used free of cost by entire cities.

“The concept was of a self-powered self-sustained Wi-Fi system that harnessed solar energy and a whole city could be connected that would run on an advertising model, so that device was always free for people,” Banka explains.

However, after working on the project for four to five months and coming up with the prototype and designing the infrastructure, the team of youngsters found out that they were not eligible to apply for government tenders, and hence had to drop the idea. Still, Banka says they plan to revisit the idea in the future.

While Banka and his team were working on the Solar Wi-Fi project, the infamous Nirbhaya rape case shocked Delhiites in 2014, and that too the incident took place near the place where they worked.

“We were shocked to find that in this era of education and connectivity, such things could prevail,” Banka recalls.

The team started thinking of coming up with a technology that could help a person reach out to the right people at the right time in an emergency. They started doing groundwork, talking to hundreds of people and analyzing where the problem lay.

“Again, drawing from the research we had done for the Wi-Fi project, we wanted to build a software or an infrastructure that connected people. We thought of a small device that could act as a trigger button. On activation, this button can connect to your guardian, police station, or your nearby community, who can come and help instantly. That was the whole idea behind SAFER,” says Banka.

After working on the project for eight to ten months, the young team launched SAFER smart jewellery in December 2014, and within three months, it became quite a sensation in India. The group received multiple national as well as international recognition for their product. When Leaf Wearables was chosen amongst the top 10 innovative startups in India by the Department of Science and Technology, the team accompanied Prime Minister Narendra Modi on his visit to Silicon Valley to participate in the first India-U.S. Startup Konnect in September 2015. Soon, Leaf Wearables became one of the top three selling variables in India.

Banka recalls the emotional and monetary support he and his team mates received from their families when starting the company. “We know they believed in us because all of us had to drop campus placements in order to focus on Leaf full time,” he says.

They also took part in several national and international competitions, in India as well as Singapore, Dubai, and the US, from which they managed to raise around INR 40 lakh. Winning those competitions not only helped them raise the token money, it also gave them a lot of confidence. “It validated our concept, and then we were able to raise the token money and launch the product in the market,” Banka says.

However, it wasn’t all that easy to set up shop for a hardware company in India. Leaf had to find the right kind of manufacturer, who could produce the right kind of small device at the right cost. They traveled to several cities, such as Hyderabad, Delhi, Mumbai, and Bangalore, looking for exactly what they wanted and wasted quite some time.

“That’s why, I still believe that India needs to change its infrastructure for hardware startups to come up and sustain,” says the young entrepreneur.

Another challenge they faced was that they were very young. “We were just five kids out of college trying to build a hardware company. It did get overwhelming at times. It took time, but then we found partners who were focused on solving the problem,” Banka remembers.

On asking why they called their company ‘Leaf’, Banka replies that the concept of the company is that it is simple and elegant outside but has complex technology inside. “If you look at our logo, you see a simple beautiful leaf. A leaf is simple looking, but it is one of the most complex things. It is the only thing that can actually produce food. We too want to make products that are very simple and elegant to use but are loaded with advanced technology folded inwards.”

SAFER can be used as smart jewelry in the form of a necklace and is available in three colors. Leaf products are sold from their website and are also available on Amazon. The cost of a safety pendant is INR 2000, and the products in the audio segment range from INR800 to INR2500. Leaf has plans to launch around three to four more products in the coming months.

As part of Leaf Innovation’s future ambitions Banka revealed that the company is looking at two different verticals. One is the safety vertical, where they are building wearables for safety. This includes kid safety products. Apart from this, Leaf Innovation is entering the digital audio domain, where they are building products that cater to the digital audio market like earphones and speakers. Currently, the team is working on the research and development in the audio domain.

“We have already launched Safer kids, which is a smartwatch for kid safety, and apart from that soon we will be launching something for the elderly.”