There are loads of places to get reviews on the latest apps, and there are many places which will advise you about which ones to spend your money on. But there isn’t any service which lets you see what developers are working on before the app is released – and let you provide feedback on what they’re doing before the app even comes to market. Well, now there is. Welcome to ooomf – an exciting new startup with over $500,000 in funding that aims to put potential customers in touch with app developers, allowing them to provide feedback on the app process from the ground up. What’s the benefit of ooomf? It’s twofold, really. First up, customers can have a hand in crafting precisely the kind of apps they want and need. Secondly,  developers can get great iterative feedback before releasing their product – and gauge customer interest before they even start selling.

Up to now, the app development process has kind of been under wraps. Very occasionally, designs will pop up on design showcase website Dribbble, but there’s little about the functionality of the app itself. This means that there’s a disconnect between the process of app design and development and the app release – which means uncertain results for developers. So developers are very likely to welcome ooomf’s way of turning the market on its head. Ooomf will support developers of both the iOS and Android tablet flavours of mobile device – making better apps across both of the platforms.

For customers, the benefits of ooomf come from two directions. First up, there’s ‘discover’, helping customers to find out about new apps before they even come in to existence (and shortly after they do). This is a crowded market, and there are plenty of services which aim to help customers to find apps suited to them (not least, the App and Android Stores’ own suggestion programs). So it’s the next benefit that really promises to be exciting. It’s called ‘participate’.

The slogan for ‘Participate’ is ‘Help the community, give back, be cool’. And that’s the vibe here – it’s super-easy to give feedback straight to developers. Essentially, devs can poll ooomf’s user-base and get fast answers from large sample sizes. Questions can range from app questions at the point of inception – is this app a good idea? – right to app questions at the point of completion (‘which of these icons do you prefer? Click your favourite’). The section also provides valuable free marketing for devs.

It would be shocking if ooomf remained the only service to offer this kind of development interactivity – there is a large untapped market to get involved with here. And the jewel in the crown is that ooomf is marketed as being a ‘social network’, connecting people with a common interest. In the world of factually-based internet communities – as Randall Munroe pointed out, there’s no bottom – finding a group of people with whom you feel you have something in common can be a very big draw. Ooomf’s idea is unique, and inspiring – let’s hope it can take off.

Rise of Coding : Why We Should All Learn A Little Code [Infographic] 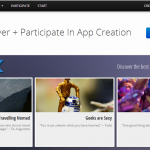