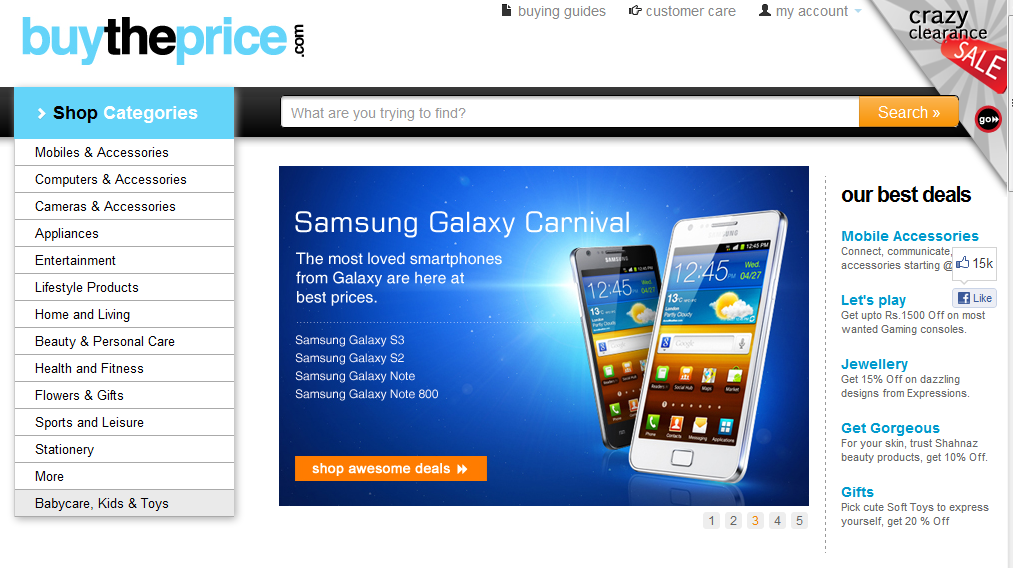 Hyderabad-based MyZingo eCommerce Service Pvt Ltd, which operates the e-commerce portal BuyThePrice.com, has raised Rs 8.5 crore from the South African media conglomerate Naspers, reports TechCircle. The report states this funding was closed in February but hasn’t been publicly revealed yet.

MediaNama was aware of this development (through sources), and we had contacted Naspers for a confirmation, however, the company had declined to comment on the funding, last month. Note that both Naspers and BuyThePrice have not confirmed the funding to Techcircle.

Prior to this funding round, BuyThePrice had raised an undisclosed amount from a series of angel investors including Google India MD Rajan Anandan, Rehan Yar Khan, Sunil Kalra and many others, although an Economic Times report pegs the funding at Rs 50 lakh. Quoting the company CEO Ranjith Boyanapalli, the report also stated that BuyThePrice had earlier raised an angel investment of Rs 20 lakh and a seed capital of Rs 10 lakh from friends and family.

While there is no word on where the company plans to use the funding raised, Boyanapalli had stated in an interview to the publication in July that they plan to open offices in Bangalore, Chennai and Ahmedabad in the next 2-3 months. He had also stated that they intend to launch ad campaigns in cinema theatres.

BuyThePrice was launched in March 2010 by Boyanapalli, who was previously the former Head of eTail for the e-commerce company eYantra, along with Tharachand Suryadevara and Jagdish Kothapalle. It currently has offices in Hyderabad, Mumbai and Delhi and claims to offer more than 1 lakh products across 1000 brands and 400 categories like mobiles, computers, cameras, entertainment devices, lifestyle, home & living, beauty, health and fitness, flowers, gifts, stationery products, and auto & travel accessories. We also noticed that the site has listed a baby products and toys section, although it was inactive at the time of writing this article, indicating that the company plans to add this category to the portal in the near future.

Transactions & Revenue: The company claims to register 1,000 transactions on a daily basis with 35-40% repeat orders and claims to ship more than 10,000 products to 3,000 locations in the country, as indicated by the ET report. Revenue wise, BuyThePrice claims to have generated Rs 3 crore revenue in the first year and was hoping to reach Rs 100 crore by the end of this fiscal year (2012-13).

Flipkart Funding: This is Nasper’s second investment in a mainstream e-commerce portal this year. Last month, Naspers had also invested in the E-commerce major Flipkart, with participation from ICONIQ Capital and existing investor Tiger Global. While the conglomerate refused to reveal any details on the amount invested in Flipkart, citing confidential contractual terms, reports had suggested that Naspers had invested around $90 million in this funding round and become the second largest shareholder of the company after Tiger Global.

Naspers’ investment in MIH India: Its quite interesting to see Naspers continuing to make investments in e-commerce ventures which competes with another company, Tradus, operated by its own investee company, MIH India (Ibibo). Naspers had invested ZAR 92 million (around $12.8 million or Rs 59.2 crore approx) in MIH India (Ibibo) during the fiscal year 2010-11 (FY11),  ZAR 76 million (around $10.6 million approx) in the fiscal 2009-10, and ZAR 98 million in the fiscal 2008-09.