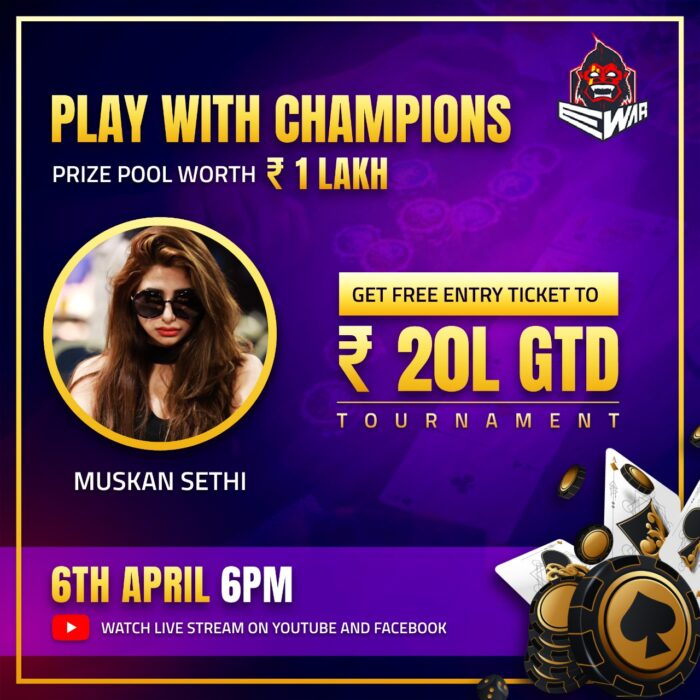 Bengaluru-headquartered gaming start-up EWar Games has announced its upcoming virtual poker tournament named ‘Play the Champions’ with the tagline ‘Beat the Champions, Become a Poker Hero’ – an online live event where semi-professional poker players and/or amateur poker enthusiasts across the country will get a chance to play and win against two renowned poker champions of India, Muskan Sethi and Gaurav Sood. The tournament, which is scheduled to be held 6.00 PM onwards on 6th April 2021, will be livestreamed by noted professional poker player of the country – Aniruddha Joshi.

In terms of rewards, the tournament will have a total prize pool value of around INR 1 lakh, which shall include INR 50K GTD (Guaranteed Cash Prize Money) and up to INR 50K worth tickets (to other premium poker tournaments). Apart from cash prizes, the top-performing players who are able to qualify for the final tables will also be rewarded with tournament tickets to a number of upcoming poker tournaments like BSS AfterParty (2 lakhs GTD), BSS Afternoon (2 lakhs GTD) and The Big Show (7.5 lakhs GTD). Furthermore, if any participant is able to knock out at least one of the two ‘Poker Heroes’ (either Muskan or Gaurav) during the tournament, he/she will be given a special prize viz. a free ticket to BSS Superstack tournament having 20 lakhs GTD.

Speaking about the tournament, Parth Chadha, Founder and CEO, EWar Games says, “In the last few years, the real-money-based poker gaming scene in India has witnessed exponential growth. In view of the growing popularity of online poker in the country, we at EWar have been conducting many small poker tournaments on our platform. However, ‘Play the Champions’ is going to be our first big poker tournament that will be livestreamed exclusively for EWar users. We are delighted to partner with Muskan and Gaurav – the leading poker players of our country – for this tournament. We look forward to seeing what the emerging and/or less-known poker players of the country bring to the table, and how they play their moves to overpower the star players in the mind-centric poker competition.”

Notably, both Muskan and Gaurav – the two ‘Poker Heroes’ of the tournament — are currently seen as trailblazers in India’s poker gaming space. “Poker Queen” Muskan Sethi has earned fame as the country’s first female internationally-recognized professional poker player, who received the Women’s Achiever National Award from the President of India in 2017. On the other hand, Gaurav Sood has represented the country in various international poker tournaments like Asian Poker Tour, European Poker Tour., and accumulated over INR 3 crores in prize money winnings.

Since the introduction of poker on its gaming platform in January 2021, EWar Games has seen the game growing and increasing in popularity amongst its user base. Currently, over 6000 cash game hands of poker are being played daily on EWar. While leveraging the upward growth trajectory of the online poker industry in India (which is growing at 35-40% year-on-year) and the burgeoning pool of active poker players and poker gaming community, EWar is committed to provide a seamless and fair-gaming experience for all those who’re interested in real-money poker.

To register for EWar’s upcoming ‘Play the Champions’ poker tournament, one needs to visit the EWar platform and then click on the ‘Tournaments’ section under ‘Poker’ category. The primary entry fee (buy-in amount) for the tournament is INR 100. However, a registered participant can also re-buy a ticket (of INR 100) to re-enter the tournament, once his/her chip expires while playing; and he/she will also allowed a late entry/ log-in limit of 90 minutes after the tournament streaming starts.

Registrations for the tournament are currently underway and will close on 6th April by 7.00 PM.