Last week, Facebook launched a new iOS app called Poke which lets people send photos, videos, pokes, or text Facebook messages to their friends that expire after a few seconds. This app has raised many eyebrows because of the way it unabashedly copies the popular texting app, Snapchat. Mark Zuckerberg, is said to have coded the app himself and the entire app was developed in just 12 days, thanks to Facebook’s “Hacker Culture”.

The Poke app lets Facebook users to send messages with a photo or a short video(up to 10 seconds) that self-destructs after 1,3,5 or 10 seconds. When a user has been ‘poked’ they get just a notification in the web-version. On mobile, if the Poke app is not installed, a link to the Apple App store is displayed in the Facebook app from which the users can download the app and see who/what poked them. While the app by itself does not bring any additional value to the table but ephemeral messaging seems to the next hip thing and Facebook wants a piece of it. The initial reviews of the app mentioned it as being slow which is not surprising considering the short development duration it had. So hopefully things should get better soon once the app gets some traction.

So a lot of people are wondering why Facebook built this app, the answer probably lies in the fact that users are no longer bound by the desktop and if you need to engage users, then mobile is the way forward. Also Facebook could have built the app to just ‘show off’ that it can indeed pull it off and also to sound a clear warning to any other competitor who might be planning to build a rival app – Poke You!

Though Facebook is late to the mobile game, having bet on HTML 5 earlier(which flopped) but now it has switched gears to native app development and has made quite a few leaps with recent app releases which include the revamped Android app, Facebook Messenger app, Facebook Photo-Sync feature and now Poke. The common emotion that Facebook evokes among people is ‘privacy concern’ and considering the fact that Snapchat has grown in popularity because the service is used mostly by teens to share racy snaps, some kids might want to keep their personal lives private from uncle Zuck’s all pervading eye. But that has not stopped the app from claiming the top spot in iTunes store toppling Google Maps to the second place. Also another consoling fact for the privacy paranoids is that all Facebook pokes are encrypted and the keys will be deleted in two days and even this is to facilitate abuse reporting. So you can breathe a sigh of relief and give this already popular app a spin.

Mobile has long been the sore thumb for Facebook and the only way for the company to grow is to monetize its user base on the mobile platform and for that it needs to get its apps in as many hands as it can. So all the best to Facebook with that! 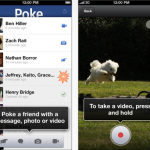