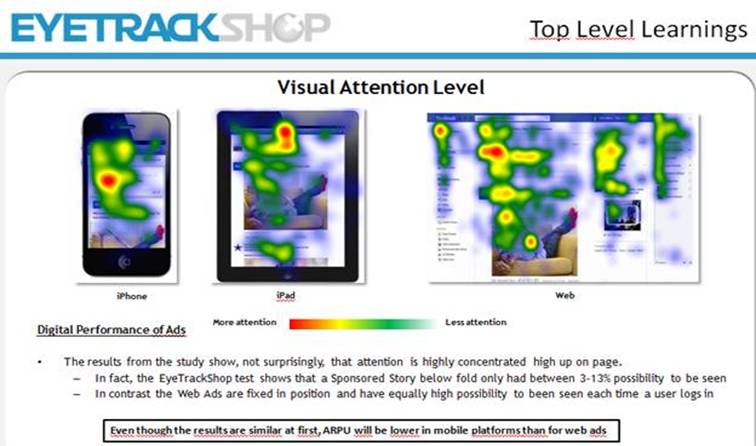 Fresh off of a lackluster second-quarter earnings release and new lows in its share price, Facebook was dealt more bad news on Friday when EyeTrackShop, a firm that measures audience attention, released a study suggesting that Facebook’s business model may be broken. The culprit? The same mobile ads that CEO Mark Zuckerberg and COO Sheryl Sandberg lauded when they spoke with analysts Thursday afternoon.

EyeTrackShop analyzes webcam imagery to track the eye movements of individual audience members while they attend to onscreen content. The firm’s study examined audience attention to ads displayed by Facebook on its website as well as on its apps for iPhone and iPad. While adds displayed in iPad apps generally did better than those on the Website, ads displayed on the iPhone performed poorly. Among the study’s findings:

We’ve asked Facebook for comment on the study and will update as soon as we hear back from them.

During yesterday’s call, Facebook executives revealed that more than half of its users regularly access Facebook through mobile sites. That raised concerns among analysts and investors, as nearly 85% of Facebook revenue comes from advertising, which the company has been struggling to implement on mobile platforms. The executives stressed that while their mobile strategy is in its early stages, early tests suggest that the limited number of mobile ads that have rolled out have performed well and delivered a return on investment to advertisers.

The EyeTrackShop study calls this strategy into question, where smartphones are concerned, at least.