Popular newsreader Flipboard is finally officially available on Android. It now supports integration of shared articles from your Google+ feed alongside Twitter and Facebook feeds, and has also added support for YouTube video feeds.

Flipboard is not just available at the Google Play Store for Android but it’s also available in the Amazon Appstore, Nook Store and Samsung Apps. The app comes optimized for screen up to 7 inches in size. It has the option to go full screen with no menu bar up top, if you need a few extra pixels on your display. Article sharing is also here and like other Android apps, shares to any services you have installed, not just Twitter or Facebook.

Download the app at the Google Play store and give it a try. Do leave your comments below. 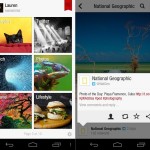