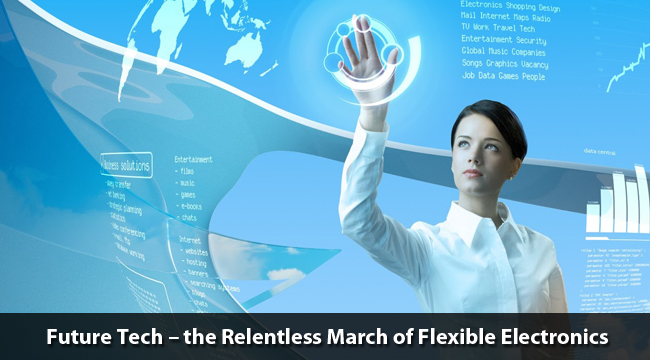 From concept to product, the world is now sitting up and taking notice of the next generation of smart technology – smart watches. Still admittedly somewhat bulky (and probably due to be superseded in short order by subsequent generations), smart watches such as the Galaxy Gear and concept watches like the Pebble represent what can be done when you take elements of disruptive technology and apply it in a totally different field. But think back to those first gen ‘brick’ phones of the 1980s and how quickly they shrank down to a size where it was all too easy to lose the wretched thing! Now apply the same principles to the Gear watch, for example, and it’s easy to see that in no time at all those big, bulky watches will shrink down to a much more user-friendly size. But what has enabled manufacturers to take this particularly innovative road in the first place? Simple – flexible electronics.

Our world is dominated by technology, but up until a few years ago it was cumbersome, fragile and rigid. Now, the ability to print electronic circuits on flexible plastic rather than the stiff component boards of old means that we can take a fresh approach to not just design, but to application as well. Wearable electronics is the next big thing, with everything from Google Glass’s innovative headset through to organic electronic sensors to monitor health conditions now a reality. Industry analysts estimate that the global market volumes for wearable electronics could easily exceed 130 million units by as early as 2018, representing an estimated US$8 billion in revenue.

The industry is now starting to recognize just how potentially lucrative the wearable electronics market could be, and recently Intel Investment and a consortium of other interested parties including Stanford University and iNova Capital, have invested US$11.75million in Basis Science to develop wearable electronics that will help users maintain a healthy lifestyle as well as monitoring their health.

Wearable technology could represent a change in how we manage our health, and could lead to a much more ‘preventative’ approach to healthcare, rather than treating conditions once they arise.

But there is also the opportunity to produce a wide range of wearable electronics for the consumer market, especially with the advent of augmented reality electronics such as Google Glass. This could fundamentally change the way we interact with our environment too, but one issue remains to be addressed, and that’s how these devices are powered.

Batteries are still heavy, cumbersome and the one element of electronic devices that limit the number of applications and situations in which even the most flexible electronics can be used. However, as smarter power technology comes online, this could easily combine with the current technological advances being made by companies such as Plastic Logic, and propel wearable electronics to a new level. Plastic Logic’s CEO Indro Mukerjee has recently spoken about the potential of flexible electronics and in particular the development of colour display technology, which could mark a significant turning point for wearable electronics. He said in a recent interview that: “Plastic Logic’s development of a colour flexible plastic display is particularly significant, since the same process could enable unbreakable, flexible display solutions with other media such as LCD and OLED.

With this level of research and development carrying on at a rapidly increasing pace, it won’t be long before wearable electronics are part of all our lives.

Verena blogs about gadgets and technology, covering everything from the latest mobile advancements to display technology. When she’s not online Verena enjoys swimming, cycling and travelling the world.