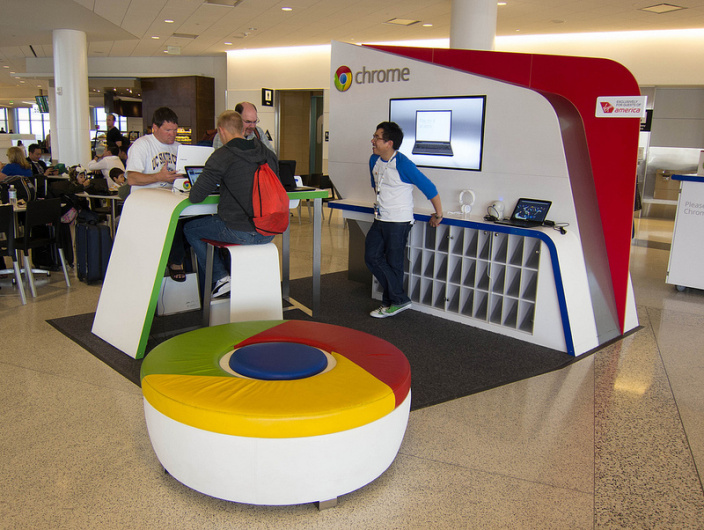 As per a recent 9to5Google report, Google is planning to launch its own chain of retail stores. Until now the Internet search giant’s products have been almost software services such as GMail, Maps, Youtube, etc. but now Google seems keen in entering hardware business with its Nexus line of android based smartphones, tablets and Chromebooks. Users like to touch and feel the phones before they buy it and Apple understands this better than anyone; the Apple stores with the complete arsenal of iDevices and the Genius bar have become a golden standard for providing the best electronics retail store experience to users. Even Microsoft has gone aggressive to promote its Surface Tablets by launching retail stores and there are reports that even Amazon is considering launching one too. So Google had better get its game together soon in the retail space if it wants to be taken seriously as a hardware vendor.

As of now, Google currently has ‘pop-up’ Chrome Stores in hundreds of Best Buys in the U.S. and in over 50 PCWorld/Dixon’s in the U.K. These stores are typically manned by experts who can answer questions about Chromebooks and help users make a decision. These stores do not have any hardcore sales target to achieve and are more for showcasing the inexpensive Chromebooks. Compared to Chromebooks, Google has a better sales record for the Nexus line so it is almost essential to have brick and mortar stores where users can experience the ‘stock Android’ in all its glory before checking out the offerings from other Android OEMs.

Another use of opening a retail store will provide Google a platform to demo the ambitious Google Glass project when it arrives. Being a completely new product that could change the way we interact with machines, the Google Glass definitely needs to ‘worn and used’ by users to understand how it works. Apart from this, Google is also working a secret X-phone and also sell its apparel and other Google-branded merchandise.Despite everything moving from the physical to the virtual and every service delivered over the cloud, there is one thing that a retail store can build better than a customer support line – customer relationship. A retail store acts as a face for a software company and helps influence customer perception about the product and the brand itself. The retail stores war has just begun and lets see if anyone can come even close to the Apple experience.