Google’s Bid to Save Endangered Languages

The Miami-Illinois language was considered by some to be extinct. Once spoken by Native American communities throughout what’s now the American Midwest, its last fluent speakers died in the 1960s. Decades later, Daryl Baldwin, a citizen of the Miami Tribe of Oklahoma, began teaching himself the language from historical manuscripts and now works with the Miami University in Ohio to continue the work of revitalizing the language, publishing stories, audio files and other educational materials. Miami children are once again learning the language and—even more inspiring—teaching it to each other.

Daryl’s work is just one example of the efforts being made to preserve and strengthen languages that are on the brink of disappearing. Google in its official blog post today, announced a new project to save endangered languages.

This is what they had to say:

Today we’re introducing something we hope will help: the Endangered Languages Project, a website for people to find and share the most up-to-date and comprehensive information about endangered languages. Documenting the 3,000+ languages that are on the verge of extinction (about half of all languages in the world) is an important step in preserving cultural diversity, honoring the knowledge of our elders and empowering our youth. Technology can strengthen these efforts by helping people create high-quality recordings of their elders (often the last speakers of a language), connecting diaspora communities through social media and facilitating language learning.

The Endangered Languages Project, backed by a new coalition, the Alliance for Linguistic Diversity, gives those interested in preserving languages a place to store and access research, share advice and build collaborations. People can share their knowledge and research directly through the site and help keep the content up-to-date. A diverse group of collaborators have already begun to contribute content ranging from 18th-century manuscripts to modern teaching tools like video and audio language samples and knowledge-sharing articles. Members of the Advisory Committee have also provided guidance, helping shape the site and ensure that it addresses the interests and needs of language communities.

You can read the full post at the official blog. Also check out this video below: 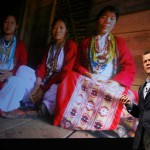 Google’s Bid to Save Endangered Languages