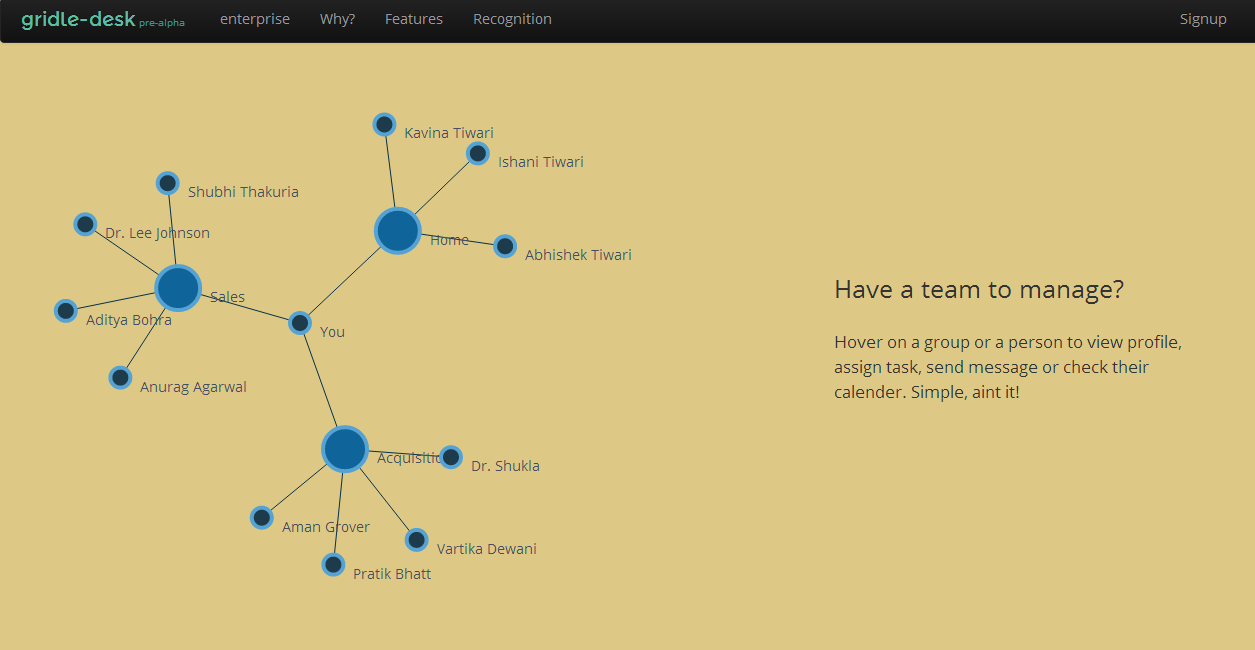 As the number of people in organization increases, effective collaboration becomes a must. For small sized companies, free open source software come to the rescue. For larger ones, they surely have in-house IT team, servers and built in collaboration platforms. So, the mid sized SMB’s with employee strength around 50- 1000, they have to resort to premium models of existing collaboration platforms in the market. They end up paying huge amounts, as the licenses are around $5 – $8 a month per user. Gridle, founded Yash Shah, Abhishek Doshi and Anupama Panchal helps SMB by providing a much better platform with comparatively cheaper price, about 85% cheaper than the competitors. Gridle is a Microsoft Bizspark Plus member, an IAN virtual incubatee and an iAccelerator, IIM-A portfolio company.

We catch up with Yash and get the story behind Gridle, in his own words.

Me  and Abhishek did schooling together and have known each other since 7 years. In March 2011, we  secured an internship at IIM-A under Prof. Anil Gupta at a Bplan competition at NIT-Surat. Under Prof. Gupta’s guidance, we  started working on a student-industry connection portal for internship for GTU engg. students. After absorption of the project by Srishti.org, we started working on an open blogging platform www.blogtard.com/ in Dec 2011.

[pullquote]Honestly, it was a little difficult to keep blogtard on hold due to the emotional connect that we have but after a year, we came to terms with the fact that gridle has a much tangible, sharper and clearer value prop and target market.[/pullquote] Since both of us did not belong to IT background, and hiring full-time employees would require funds, we scouted local IT colleges and recruited 24 interns including Anupama and Faishal from DA-IICT and Nirma Uni over 8 months. For paying stipend, we boot-strapped and arranged funds by participating and winning in different B-plan competitions held at college level. Abhishek, the jugaadu he is, came up with awe-striking ideas with absolute zero feasibility and Me, being the mechanical engineer, converted them into believable ones. Unethically speaking, this jugaad fared out well for the funds that we required and we found our CTO in Anupama and our technical mentor in Faishal. Our next batch got us Hardik, Kaushal and Naimish which completed the team required for product development.

During the year 2012, we met Mr. Niranjan Mehta (An independent angel investor and Ex-CEO at TATA telecom) who mentored us and during the brain-storming sessions that we had with both Mr. Mehta and Prof. Gupta, we conceived gridlerealizing that though blogtard had a good team, it missed a sharp value proposition. [pullquote align=”right”]We are taking a completely different approach to UX.  For us, its not about the fonts, color or button-sizes; along with all of those, its about the way information is projected and grasped by the user.[/pullquote]Gridle has replaced matrix based calenders by graph based planners (45% more efficient and 3 times faster to grasp) and listings of employees or team-mates by polar-circo (One screen-space, non-cluttered, tells you exactly what you want to know). The platform uses data-visualization to generate and maintain log of activity and communicating upcoming events to users.

Typically, a collaborative tool has 17 to 19 features in all. We have 6, perfectly crafted and well researched to suit needs as far as establishment of bankable communication channels is concerned. We have devised an efficient feedback mechanism in terms of who is working on which project till what time and what milestones have been achieved.We will be integrating dropbox and evernote respectively as soon as our MVP is in private beta-testing. We are currently working on integrating google drive as well. Sign up and data extraction from google account (sign up with google) will also be put up.

Gridle is a freemium model as of now. It is free upto 32 people (max 4 groups per person and max 8 people per group). After that, we would charge INR 50-100 per user per month for upgraders and upfront cost for enterprises depending upon the cloud space that they require. We are “pay as you go” so that there are no entry or exit barriers. You can start or discontinue your service as and when you might like. For the next six months, we want to test our hypothesis and structure the product according to the results obtained from user metrics. We would then be ready to scale the product globally as well.

Gridle definitely fills in a gap in the existing SMB Collaboration Market, by offering a visually appealing tool at a cheaper price.  The sign that customers are willing to try the product, when it is in Private Alpha is something very positive. One thing that would be crucial is to keep gathering user feedback on the new UX and implement the changes along the way.