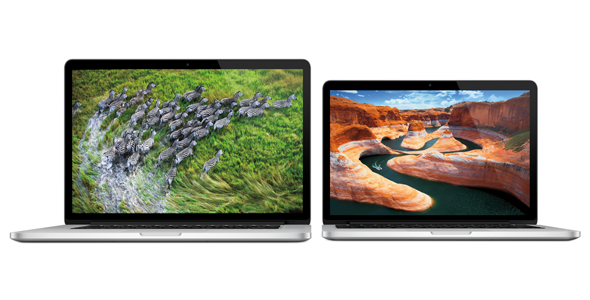 How Does The Apple Retina Display Work?

These days, people are crazy about the Apple Retina Display. Supposedly, it does wonders! A completely non-pixelated screen? Who would have ever thought?! However, many questions loom the supposedly revolutionary technological advancement. Is it really non-pixelated? How exactly does it work?

Fortunately, I’m here to answer nearly all of the questions you have about how the LCD Retina Display itself works. It’s a pretty nice piece of Apple hardware, and in my opinion, it’s a great leap forward into our screen-filled world. From PPIs to PPDs, I’ll tell you everything that you need to know that makes the Retina Display tick.

The Rundown On Lines & Pixels

I know this is supposed to be a big article about Retina Displays. However, right now we need to take a little detour. For now, I just want to talk about 1080P/I screen televisions. Everyone wants one, right?

1080 simply refers to the amount of lines that run vertically across the screen. But what about the lines running horizontally? There are 1,920 of those, so let’s multiply them together for fun – 2,073,600. But what does this number mean? This, my friend, is the number of pixelsfound on the screen.

Furthermore, regardless of how big the screen is, this will always be the same number of pixels. It’s just that the screen areas reserved for individual pixels just get bigger, causing lesspixels per inch (PPI). That said, the more PPI, the smaller the 1080 television screen, but the less distinguishable the pixels are.

So essentially, with any given high definition television, you get (about) 2 megapixels worth of screen real estate. (Granted, there’s a such thing as RGB subpixels for each individual pixel, but that’s really not worth talking about.) Generally speaking, this just explains how all screens work. You have a set of horizontal lines, and you have a set of vertical lines. These lines converge at multiple points (the pixels), and this sets up your picture piece by piece like a puzzle.

Newspapers (and any printed piece of work) are printed using a variety of dots that build up the resolution of an image. Much like pixels, these dots build up the entirety of the image. The more dots there are, the higher quality the picture. Additionally, they can help with the color grading of the image. Lighter colors feature dots that are further apart while darker shades place them closer together. At that point, it’s mostly the size of the dots that help with the image resolution.

For an experiment, grab a piece of paper (or imagine one), and draw a bunch of dark dots together in the shape of a circle with a radius of about an inch. Make sure the dots are fairly close together, but leave a little space between them. Now tape it to a wall, stand about 6 feet back, and look at the image on the paper. You should see a semi-solid circle.

Now, let’s do something a little different. Draw a circle the same size, but this time, use a larger amount of tinier dots and put them much closer together. Go ahead and stand 6 feet back once more. This time, you should see a much more solid circle. Now move closer – about three feet should do. You should notice that the dots still seem to form a decently solid circle.

Essentially, this is how dots and pixels work with print and digital images. With print pictures, image quality comes in the form of dots per inch (DPI). As you can tell with the image here, the more dots that are in an area, the closer you are able to get to the image without seeing them. That said, the more horizontal and vertical lines that exist on a screen, the higher quality an image.

Apple claims that the human eye’s limit for seeing an image at a distance of about 10-12 inches away is 300 PPI. Granted, this is supposedly based on 20/20 vision, and it certainly is variable, but at least it’s close. That said, the Retina Display resolution for the iPhone 4, 4S, and 5 (as well as the 4th and 5th gen iPod Touches) is at 326 PPI. Basically, this allows for the phones to offer a higher resolution than what the human retina can see. Thus, it appearsas though nothing is pixelated whatsoever.

Below is a video featuring the late Steve Jobs explaining the basics of the Retina Display (including the PPI information that I have already stated).

Retina Displays just smashed a few extra pixels into a smaller space, right? Yes, but it gets a little more complicated than that. There is an entirely different unit of measurement for Apple’s Retina Display system: pixels per degree (PPD). Basically, we take two pixels that are at the optimum distance from the eye and are one degree apart from each other. We then add up how many pixels are in this triangle, and that number is the PPD.

For 300 pixels at 10 inches, the PPD should be 53. That said, anything above 53 at the optimum distance of 10 inches is considered a Retina Display. Of course, the optimum PPD varies with the type of screen and the distance viewed. For instance, a 15? MacBook Pro with Retina Display has 77 PPD but only a 220 PPI. (It’s all about the degrees!)

Here’s the info for the PPI, PPD, resolution, and optimum viewing distance of every Retina Display device:

As you can tell, there’s a bit of a pattern where the PPD rises as the PPI falls and the optimum viewing distance increases. It’s rather interesting how it all works out. Of course, this is all at the “optimum” distance. You’ll lose quality if you get a little closer to the screen, but you’d have to get really close for that to happen. Consider the DPI experiment: as you got closer, you began to see the dots the composed your circle.

Of course, there’s the question of how they crammed all of the pixels in there. Well, the fact is that if you try to put pixels too closely together, it can actually ruin the image. In an effort to prevent this from happening, Apple had to develop a manufacturing technique which would allow them to put the tiny pixels at slightly different tiers to prevent them from touching each others’ signals.

Below is another video that briefly explains those details.

How Does It Affect Your Other Media?

At a very fine level, I’m sure you could tell that the image has been resized. Even still, and I don’t know about you, but I don’t usually watch movies right up against the screen. I typically sit back with a bowl of popcorn with the screen a good distance away from me. In reference to my circle-on-paper example, you can see that this shouldn’t be a problem.

As an iPhone user, I’ve noticed that the Retina Display allows for me to zoom in on photos at their optimum resolution (but not much further). Additionally, with a 1136×640 screen (turned sideways to be 640×1136), high definition videos definitely aren’t a problem at all.

Regarding vectored images and fonts, there shouldn’t be a noticeable difference whatsoever except for the extreme clarity that these images now have. Rather than being built on pixel information, vectored images and fonts use different sizing methods. Vectors are based on line calculations, and fonts are based on the size that the code tells them to be. Basically, they aren’t locked to a specific resolution as most images typically are. They are flexible!

Essentially, this is how Retina Display works. I’m sorry to burst your bubble, but it isn’t magic. Basically, Apple just crammed a ton of tiny dots into a big space that are too small for your eye to see. This doesn’t take away the cool factor, though.

What are your thoughts on the Retina Display? Has it affected your computer usage or media-viewing experiences at all?