There’s no mistaking it: the Windows Phone 8 battle is heating up. HTC just announced its high-end HTC Windows Phone 8X  for AT&T, T-Mobile, and Verizon, two weeks after Nokia unveiled the Lumia 920 .

The resemblance between the two phones is readily apparent, and more than skin deep. Like the Lumia 920, the HTC Windows Phone 8X drops the phone screen into a richly colored slablike unibody design. Like the Lumia 920, it also shares the same processor, LTE and NFC capability, and high-definition screens.

Yet, there are important differences between the two, and these go beyond the specs. I unfortunately don’t have the phones in-house to compare side by side, but CNET has gotten hands on both devices, and we know a lot about HTC and Nokia’s strengths and weaknesses firsthand. While this analysis certainly isn’t final, it is based on knowledge and experience. I’ll update this post when we get the phones in for review.

Design
One look at the two phones and you wonder if HTC will have a lawsuit on its hands. They’re eerily similar, and HTC’s apparent mimicry doesn’t make a strong case for the originality of its flagship Windows phone. It’s a bizarre move for HTC, and one that doesn’t fit into its typical design philosophy. At least the HTC Windows Phone 8X seems to be well-crafted.

HTC’s phone is significantly smaller, lighter, and thinner than the Lumia 920, which may give it a leg up for those who prefer more pocketable devices. We’ll have fun comparing the two devices side by side.

Displays
The Lumia 920 has the slightly larger display, 4.5 inches as opposed to the Windows Phone 8X’s 4.3 inches.

Resolution on both HD screens will be similar, with HTC gaining the theoretical advantage with higher pixel density, 342 pixels per inch versus the Lumia’s 332 ppi. HTC’s 8X should look slightly sharper, but both phones’ pixel density is quite high. Both use similar LCD screen technology with IPS, or in-plane switching. Nokia claims that its screen technology will offer the smoothest viewing experience, especially for video playback.

Which phone is this? Believe it or not, it’s the HTC Windows Phone 8X.

Let’s not forget the question of outdoor legibility. Nokia boasted about its glare-cutting filter, built on top of the Lumia 900 ‘s ClearBlack Display. In the Lumia 920, Nokia promises a very bright mode that will let owners read on the beach or in the desert. HTC doesn’t make such claims, but that doesn’t mean its 8X will completely wash out in the sun at the brightest lighting settings.

Camera
The camera is one of the fight’s major toss-ups. The 8X includes HTC’s image chip and 8-megapixel camera, which we’ve seen in action on the HTC One X  and One S  phones. Shutter lag is virtually nonexistent, and photo quality is very high.

On the other hand, Nokia’s 8.7-megapixel shooter could be great — or it might disappoint like the Lumia 900’s  did. Despite sharing the same photo-rendering algorithms, Nokia’s 808 PureView camera isn’t a reliable indicator of the Lumia 920’s performance, since the 808 was equipped with an excellent and enormous 41-megapixel sensor that let the light stream in.

When it comes to the front-facing cameras, HTC’s 2.1-megapixel front-facer has the upper hand over Nokia’s 1-megapixel contribution.

Processor and performance
With the same 1.5GHz dual-core Qualcomm Snapdragon S4 processor, the same Windows Phone 8 OS, and the same 4G LTE speeds, the 8X and the Lumia 920 should run neck and neck for performance. Of course, we’ll test this when we can get the phones together.

On the Bluetooth front, HTC made the strange decisions to give the 8X Bluetooth 2.1, whereas the Lumia 920 follows Bluetooth 3.1 standards. The best-case scenario would see both phones with Bluetooth 4.0 for easy tapping and pairing. At least with NFC on both handsets, there’s room to pair with third-party accessories using the near field communication standard.

Battery and memory
When it comes to the battery, Nokia’s 2,000mAh embedded battery edges the 8X’s 1,800mAh equally nonremovable ticker. Yet that doesn’t mean its run time will triumph. First, the Lumia 920’s larger screen will also require more power than the slightly smaller 8X display.

Second, depending on your usage and brightness settings, runtime per charge could be shorter, longer, or identical. The PueMotion HD technology might even draw more battery, since it requires a voltage surge to transition from one video frame to the next. Nokia explains it in this white paper . Using the ultra-bright reading mode will also suck out more battery.

Memory is more straightforward, and the round goes to the Lumia 920’s 32GB of onboard memory, plus 7GB of free Microsoft SkyDrive storage. HTC’s 8X comes in a 16GB model, and while SkyDrive is available on every Windows Phone, HTC didn’t announce plans to offer it free. Both phones have 1GB RAM, and neither comes with a microSD card slot for additional storage.

Extras
The extra software and hardware tricks are how HTC and Nokia both hope to differentiate their phones. Nokia does this with wireless charging campaign, with its Nokia Drive and Nokia Maps apps, with its Nokia Music app, and with its PureView camera processor, discussed above.

Yet HTC offers Beats Audio, its signature audio-boosting software, and its own HTC ImageChip for photo-processing.

At the outset, Nokia seems to have placed more effort carving out a distinct experience; but in reality, the phones will behave very similarly for core tasks.

Carrier and pricing
Right now, HTC has the benefit of enlisting carriers to help rally customers to the 8X. The phone has a price ($199.99) and not one but three carriers to help lead the charge: AT&T, T-Mobile, and Verizon.

Getting Verizon onboard  is no small feat. The nation’s largest carrier has been Windows Phone-shy for over a year; the 8X will be its second Windows Phone ever.

Nokia hasn’t yet announced U.S. carriers, though there are plenty of rumors that point to an October or November Lumia 920 launch on AT&T. The pairing makes sense, since Nokia and AT&T teamed up on the Lumia 900 before it. Pricing will also be key, but if Nokia can’t get the Lumia phones on other carriers, it faces an automatic disadvantage to HTC’s widespread availability.

What about the Samsung Ativ S?
Samsung’s globally announced Ativ S  won’t pose much threat to either HTC or Nokia here in the U.S.

For one, the Windows 8 smartphone is specced for an HSPA+ chip, and Samsung would surely want it LTE compatible for the U.S. market. Yet, Samsung could very well offer a variant of the Ativ S, which could add some pressure.

Outlook
The Nokia Lumia 920 gets my vote for the storage and Bluetooth arguments, and also for integrating wireless charging using the Qi standard (we have yet to see how efficient this is, however). Yet, other major features on the Lumia 920 and Windows Phone 8X, like the camera performance and screen quality, are too close to call without comparing the two in their polycarbonate flesh.

Since the two handsets are so close, the real question of sales success will come down to pricing and availability. Even if the Lumia 920 proves to be the better phone by a small margin, if it costs more than $200, or arrives on a single carrier, it’ll be HTC’s game to lose.

How Big Tech is Contributing in the Fight Against COVID-19
Apple Falls in India: Why Indian iPhone Loyalists Are Turning 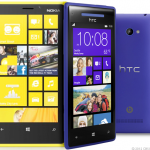