2014 has begun and the Idea to Prototype platforms are doing their best in convincing people with ideas to come and convert them into prototypes. Recently, Weekend Ventures kicked off their events with the first one in Delhi. Premier Idea to Prototype Platform run by Vijay Anand, In50hrs has conducted it’s first event in Mumbai and coming to Bangalore this February.

In50hrs, is the Idea-to-Prototype event platform, where developers, designers, and ideasmiths participate, to pitch ideas, form teams, and build functional prototypes – solving real world problems. The prototypes are demonstrated by the team in the Demo Evening to peers and a panel of jury.

The event starts at Friday 14th 5:00 PM with participants submitting their ideas. Day two – teams are formed and prototypes are kicked off. At the end of Day 3, functional prototypes are presented and feedback will be provided.

Regular ticket costs Rs. 2000 and can be purchased until Feb 12th. Demo Pass( free for Students) priced at Rs. 100 allows one to attend to See the Demos of the Participants, Give Feedback and Network.

Get your tickets here:  http://em.explara.com/event/bangalore5 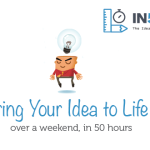