The start-up, Teller told Page, was seeing promising results, and, he added proudly, its prototypes had survived all recent tests intact. Page approved Google X’s acquisition of Makani, which was being completed for an undisclosed amount at press time. He also had a demand. “He said we could have the budget and the people to go do this,” Teller says, “but that we had to make sure to crash at least five of the devices in the near future.” Google X is the factory for moonshots , those million-to-one scientific bets that require generous amounts of capital, massive leaps of faith and a willingness to break things. Google X (official spelling is Google [x]) is home to the self-driving car and Google Glass and other improbable projects.

The Robocar
The biggest moonshot of all may be the skunk works itself: with X, Google has created a laboratory whose mandate is to come up with technologies that sound more like plot contrivances from Star Trek than products that might satisfy the short-term demands of Google’s shareholders. Since its creation in 2010, Google has kept X largely hidden from view.

It occupies a pair of otherwise ordinary two-storey red-brick buildings about a half-mile from Google’s main campus. A race car tricked out with self-driving technology is parked in the lobby. Sitting in the passenger seat of a Google driverless car is a test of faith. The car, a white Lexus RX450h with a $65,000 laser range finder on the roof, is cruising at 55 miles per hour on Silicon Valley’s crowded 101 freeway. As the car weaves to get out of the way, Chris Urmson, the head of the autonomous cars project, with hands on the lap, is unperturbed.

Last year, Sergey Brin, co-founder and director of special projects, predicted his company’s self-driving cars will be on the market in five years. If it weren’t for the robo-cars , there might be no such thing as Google X. The lab’s origins reach back to 2005, when Page first met the Stanford computer scientist Sebastian Thrun whose team of students was competing to send an autonomous vehicle in the Mojave Desert. In early 2009 Thrun started the self-driving car project at Google.

Page and Brin gave him a target: build one that could flawlessly drive 1,000 miles of open California highways and serpentine city streets. Thrun and his engineers met that goal in 15 months. Their car navigated the jammed streets of Los Angeles and Silicon Valley. As progress exceeded their expectations , Thrun, Brin, and Page began to talk about expanding the project into a full-fledged research lab. For Page and Brin, it was a way to indulge their interest in technologies beyond search — which generated $44 billion in revenue last year — while keeping the perennially restless Thrun in the fold. Brin decreed early on that the new lab would focus most of its energies on creating hardware. The company’s board of directors funded Google X in January 2010. (Google does not disclose the lab’s budget, but its R&D budget was $6.8 billion in 2012, up 79% since 2010.)

‘Are we taking moonshots?’
Google Glass was X’s second project. Babak Parviz, an electrical engineering professor at the University of Washington, who was working on wearable computers, caught the attention of Brin and Page with a paper about the possibility of contact lenses with built-in electronics that could project images onto the wearer’s eye.

The first Google Glass prototype was a 10-pound head-mounted display with multiple cables snaking down to a box attached to the wearer’s belt. The latest incarnation of Glass weighs about the same as a normal pair of glasses and is considerably more discreet. Teller compares Glass to the first Apple personal computer. “We are proposing that there is value in a totally new product category and a totally new set of questions,” he says. “Just like the Apple II proposed, Would you reasonably want a computer in your home if you weren’t an accountant or professional? That is the question Glass is asking, and I hope in the end that is how it will be judged.”

Last year Thrun left Google X to form Udacity, which is bringing college courses online. While Thrun retains an advisory role at the lab, Teller took over as its primary manager , reporting directly to Brin. It was Teller who first articulated X’s mission, in a conversation with Page. Teller was trying to put more definition behind the lab’s purpose and asked Page, Were they a research centre? No, that sounded boring, Page responded. Were they an incubator for new companies? No. Finally Teller asked, “Are we taking moonshots ?” Page replied, “Yes, that’s it.” Teller got the nickname “Astro” (real name: Eric) when his school soccer teammates suggested his spiky haircut looked like AstroTurf.

He has a remarkable intellectual pedigree. His maternal grandfather, Gerard Debreu, was a Nobel Prize-winning economist; his paternal grandfather, Edward Teller, worked on the Manhattan Project and is considered the father of the atomic bomb (and a model for Dr Strangelove). Some of the real projects in Google X sound outlandish. Makani Power’s airborne turbine prototype, called Wing 7, is a 26-ft-long carbonfiber contraption with four electricity-generating propellers that flies in circles at altitudes of 800 to 2,000 ft, sending power down a lightweight tether to a base station.

Broadband balloons
Then there’s X’s still-secret project to bring internet access to undeveloped parts of the world. A decade ago, David Grace, a research fellow at the University of York, spearheaded a project to mount broadband transmitters on high-altitude balloons, as part of a multicountry initiative backed by the European Commission, called the Capanina Consortium. It never progressed beyond the experimental stage. Grace now says he has heard that Google is working on such balloon-based broadband technology.

Last month, Google chairman Eric Schmidt said that “by the end of the decade, everyone on earth will be connected to the internet” . Sceptics immediately noted that 60% of the world is not yet online and that there are countries without reliable telecommunications grids. Teller won’t confirm such a project, though he concedes that wiring the planet would fall squarely into Google X’s purview. Grace says, “It does need the Googles of the world to push this forward.” 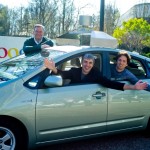