In his first interview since the remains of fallen social media Digg star were sold to Betaworks, Digg’s founder Kevin Rose said he sold some company shares during its venture-capital financing rounds but “did not make a lot of money.”

That was just one disappointment of several for Mr. Rose, who founded Digg in 2004 and was involved with the company off and on as an executive and director until its very end.

Digg was one of first social media sites, providing a way for consumers to put together their own collections of news and other Internet content by posting links on the site’s homepage, rather than relying on the choices made by newspaper editors. At one point in 2008, it was valued at more than $160 million by its investors, according to Dow Jones VentureSource.

Mr. Rose chalked up Digg’s failure to a combination of its own missteps along with an acknowledgement that the news-sharing site was outmaneuvered by Facebook Inc. and Twitter Inc. Among the missteps: Digg botched its re-launch in the summer of 2010, and, more importantly, he said the company was slow to respond to the criticism.

“We were desperately trying to figure out how to get traffic back,” he said. “A bunch of the community had already revolted by the time we fixed it.”

He also said Digg made a mistake by cloning the features of other websites like Twitter and Facebook. “We did a lot of things that went against the DNA of our product.”

Mr. Rose said that Twitter and Facebook started to eat away at Digg’s traffic as both sites evolved into places where people discovered the most up-to-the-minute news and information, the main reason people visited Digg.

“Twitter became a major place to find out what was breaking on the Internet,” he said. “Facebook became a place to share links. Social media really grew up.”

The final nail in the coffin, said Mr. Rose, was that Digg became hobbled by technology problems as the site tried to move to a new database system on the fly around the same time as the summer 2010 re-launch. Since Digg was having problems in scaling its MySQL database software, it began to shift over to another open source system called Cassandra.

“We launched with broken code,” he said. “There is nothing worse than screwing up and not being able to fix it. There was no Amazon Web services back when we launched. It would be a lot easier to build Digg today.”

Mr. Rose still believes Digg has potential to succeed under new more tech savvy ownership. He said the company was generating around $3 million or $4 million in annual revenue, had 17 million monthly visitors and money left over from previous financings. (According to research firm comScore, Digg had more than 7 million visitors per month as of May.)

If Digg was scaled back to a five-person company, he said it could turn a profit.

“To really give it the jolt it needed it needed to be in the hands of people who understand the nature of the real time Web,” he said.

Mr. Rose did not express much regret that Digg never sold itself. In fact, he said that he does not know if Digg was ever in a good position to sell the business. “At our peak no one knew how to value Digg,” he said.

Mr. Rose recalled one period in early 2006 when he said Ross Levinsohn, then president of President at News Corp.’s Fox Interactive Media, was pushing the media conglomerate to buy Digg. Mr. Rose said he met several times with News Corp. and its chairman Rupert Murdoch. “His team wanted to buy Digg but he could not figure out what we were or how we worked,” he said. (News Corp. owns The Wall Street Journal.)

Mr. Rose said the company came close a couple of times to selling itself but it never happened. Now, Mr. Rose is trying to create more exits as a venture partner at Google Ventures, where he is scouting for new investments. 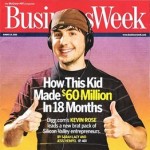