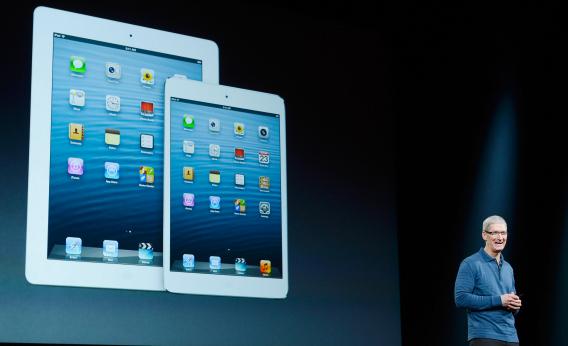 Every fall, Apple holds a big event to show off its holiday lineup of gadgets. This year, it held two big events. That pretty much sums up the most important thing about Apple in 2012. The company has long been obsessively focused on making a few devices really well. Now it’s making a lot more than a few devices.

Before CEO Tim Cook took the stage in San Jose, Calif., this morning, he had already given the world a whole bunch of new stuff in 2012: a new iPhone, a passel of iPods, aniPad with a high-definition display, and a 15-inch MacBook Pro with an even better display. Everyone guessed Cook would unveil a smaller iPad this morning, and they were right. But in addition to the iPad mini, there was also a 13-inch MacBook Pro with a high-def screen and a stunning new iMac desktop computer that’s almost comically thin.

Releasing so many new things in a single year marks a major philosophical shift for Apple. When Steve Jobs returned to the company in the 1990s, he threw out the failing firm’s gargantuan product lineup (Apple used to make printers), then drew up a new one that consisted of just four devices—a laptop and desktop for the mainstream market, and another laptop and desktop for professionals. Over the years Apple slowly, carefully added new products, including the three that would redefine the tech industry: the iPod, the iPhone, and the iPad. Even with this limited array of gadgets, Apple has always seemed to operate at the edge of its capacity. In 2007, when it launched the iPhone, it had to delay putting out a new version of the Mac operating system—it didn’t have enough engineers to do both at once. Apple wasn’t a company that could do too many new things at once, and, more importantly, it didn’t want to be that kind of company.

Compared to its rivals, Apple circa 2012 is still a highly focused firm. You could put its entire lineup of devices on a dining table; Hewlett-Packard, by contrast, makes more than 2,000 different kinds of laser printers. Yet this year, Apple is no longer stretched thin. The main difference between Apple under Tim Cook and Apple under Steve Jobs is the firm’s aggressive scope and scale: The company is launching more new devices every year, manufacturing more of them, and selling them in more places. Remarkably, this ramping up hasn’t come with any drop in quality. With the exception of its pitiful new maps app, every one of Apple’s new products is the best in its class. That’s an incredible record—I can’t think of any other company in the world that’s doing so many new things so well.

The machines Apple unveiled today only bolster this record. After the event, I spent a few minutes using the iPad mini, the 13-inch MacBook Pro, and the new iMac—not enough time to gather enough fodder for a full review of these devices, but enough to be impressed, especially by the two new Macs. The iMac, in particular, shows off Apple’s design prowess. Its front edge is just 5 millimeters thin, which is thinner than many laptops. It’s so thin that when you gaze at it from the front and even from some angles on the side, it looks like a cardboard cutout of a computer, not a working machine. (If you examine the iMac’s back, you do see a bulge in the center that presumably houses the machine’s guts.) Apple says it needed advanced manufacturing techniques to build a machine so thin—among them something called friction-stir welding and a method to “laminate” the display that eliminates a gap between the LCD and its cover glass (something it does on the iPhone, too).

You might wonder why Apple would go through so much trouble to make a nonportable machine so thin, but the answer is pretty straightforward. Thinness, at Apple, is a design virtue next to godliness, something that every gadget benefits from. But looking at the iMac, I intuited another motivation behind its reduced width. If Apple does ever make a full-sized television set, as rumors have long claimed, it will need to make it pretty thin. Building a really skinny computer might be practice for building a really skinny TV.

Thinness is also the iPad mini’s most obvious virtue. Picking it up, I was impressed by how slight it felt compared to the full-sized iPad. Overall, though, the mini’s design didn’t stand out to me—it looks and feels like a small iPad (or a big iPod touch), and it works exactly like one of those devices, too. Whether you think this is good or bad depends on whether you want something that fits this particular form factor—if you’ve yearned for an iPad but think it’s a bit too heavy or a tad too pricy, this small one is for you.

But how many such people are there? After all, the mini starts at $329, which is just $70 less than the cheapest full-sized iPad (the iPad 2, which Apple still sells for $399)—meaning that you aren’t getting that much of a discount by downsizing. And the big iPad is not really big or heavy. I’ve always considered it a perfect size for doing most tablet-worthy stuff. So why would anyone buy the mini instead of a full-sized iPad?

I don’t know, and Apple doesn’t seem to know, either. On Tuesday, none of its execs made a case for why the world needs a small tablet. It was a conspicuous omission, considering that Jobs himself railed against tiny tablets two years ago. “The 7-inch tablets are tweeners: too big to compete with a smartphone, and too small to compete with an iPad,” he said on an Apple earnings call. He predicted that they “are going to be DOA,” and for a long while, he was right—a string of 7-inch tablets failed to catch on.

But then, last year, Amazon released the Kindle Fire, and this year Google put out the Nexus 7. Suddenly, the 7-inch market was hot. And that’s Apple’s real reason for joining the 7-inch parade: It doesn’t want to lose any inch of the tablet market to competitors.

The trouble for Apple is that few people are buying the Kindle Fire or the Nexus 7 because they like the 7-inch size. They’re buying it because they like the price: Both devices sell for less than $200. They’re so cheap only because Amazon and Google don’t care about making a profit on them; they’re both more interested in getting a foot in the tablet market and perhaps making some money on advertising and media sales through the devices. Apple, on the other hand, does not sell anything at cost; its business model is to sell gadgets at a profit, and any other revenue it makes from them (through app purchases, for instance) is just a bonus. Apple, then, will likely never match Google or Amazon’s prices on small tablets. But it’s hoping that people will spring for the iPad mini just because it’s an iPad, with its much bigger app store and superior fit-and-finish.

That’s likely a good bet. Launching the iPad mini may be purely a reactive, defensive move for Apple. But when you’re as big as Apple is now, you can play offense and defense at the same time.