Jayshree Ullal’s passion for technology is obvious in the lucid way she explains esoteric topics such as cloud applications for Big Data and the future of the internet. Selected as one of the most influential people in technology by Forbes magazine in 2011, Ullal gave up her job at networking giant Cisco as senior vice president to move to Arista Networks, a start-up.

Ullal joined Arista, founded by a group of well-known serial entrepreneurs, in 2008 as president and CEO. “I was part of Cisco as it grew from $600 million to $40 billion and my own division grew from 0 to $10-billion-plus in annual revenues. But in moving to Arista, I was seeking something more entrepreneurial and a new hill to climb,” she says.

She didn’t really plan to become an entrepreneur but came on board at Cisco when the company made its first acquisition of Crescendo, of which she was a co-founder. Today at Arista, she finds her Silicon Valley entrepreneurial dream rekindled in creating a new cloud networking market and helping customers migrate to modern networks.

Even as she concedes that her former employer Cisco is the Goliath in the global networking industry, with around 70% of the overall market share, Ullal believes that Arista, a private company, is ahead in the cloud networking space. And staying ahead of competition, for her, is all about technology.

And as a high-tech Silicon Valley CEO, she remains addicted to technology even today. “I firmly believe that the school education system, both in the US and India, should be geared up to encourage students to study maths and science to create a deep engineering talent pool,” she says. She is passionate about the need for the youth to focus on pursuing technical and science education. And the pipeline for female technical talent is still too small, for her, even in the US.

“The US has always encouraged immigration of the best minds and they should be nurtured, not stifled,” she adds. Being one of the top women technology leaders in Silicon Valley for her is largely because of the support that she has received from her family — college-going daughters Aditi and Tarini and husband Vijay Ullal, president & COO of Fairchild Semiconductor. “I am lucky to get tremendous support from family and not trying to be a superwoman. It is great to see key women leaders at Facebook, IBM, Yahoo and HP, all contributing to the female tech leadership,” she says. 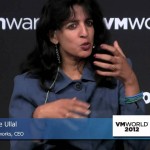