Now here’s something you don’t see everyday: a helicopter with 18 rotors.

It’s called the “Volocopter.” It was created by the inventor and physicist Thomas Senkel. It’s described by its creator as resembling a blender. And it’s attracting major attention in the aviation world for innovation and sustainability.

Last October, Senkel released a popular video of himself test-flying the Multicopter, a Volocopter predecessor with a piddling 16 rotors. That video had been viewed more than 3.5 million times on YouTube and gained Senkel and his Multicopter widespread notoriety among techies and futurists.

The Volocopter, however, is bigger, better and badder — at least in its current concept form. Senkel’s Germany-based startup e-volo says the machine will eventually run solely on battery power. In April, the Volocopter concept was awarded the prestigious Lindbergh Prize for Innovation by the Charles A. and Anne Morrow Lindbergh Foundation. Yolanka Wulff, the foundation’s executive director, told Scientific American the Volocopter concept was awarded for its simplicity, safety and energy efficiency.

And how do you fit 18 rotor blades onto one chopper? The blades, each measuring about six feet in length, are arranged in two concentric circles atop a cockpit designed to hold one or two people.

Senkels tells Scientific American the craft could fly with as few as 12 blades if they were properly distributed. He says a Volocopter prototype could be here in less than a year and production models could hit the assembly line in three years.

Most Stunning Photos of Planet Mars The World Has Ever Seen 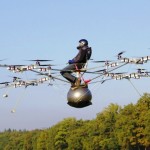