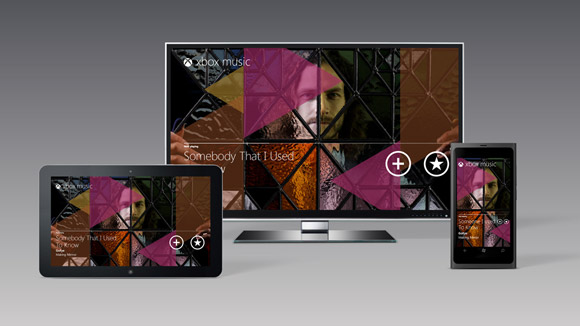 Microsoft will soon become the next player to enter the streaming music business, with a service that will see it competing against the likes of Spotify and Rdio. Its new Xbox Music service will soon become available on the Xbox Live service, as well as on Windows 8 tablets and PCs and Windows Phone mobile devices over the coming weeks.

Xbox Music seeks to combine all the best aspects of the existing music services, by enabling free and paid models for streaming a vast library of content, as well as the ability to purchase and download music to your devices. Microsoft has licensed music from all the major labels, as well as a ton of independents, giving the Xbox Music services more than 30 million songs in its catalog.

Like Spotify, users will be able to search for all the songs, artists, and albums they want to listen to, and begin streaming them for free on supported devices. Like Pandora, they can listen to music similar to a certain song or artist, through playlists created by the service’s Smart DJ. Or users can create their own custom playlists of songs, which will become available across whichever devices they want to listen from.

In addition to the free, ad-supported version of the service, there’s also the option of a premium monthly subscription. Xbox Music Pass will allow users to tune in to songs ad-free. With Music Pass, users will also be able to download songs to their devices for listening while online or offline. Xbox Music Pass costs $9.99 a month, or $99.99 a year. And for tracks that users will want to own, or aren’t available for streaming for whatever reason, the service will also have a Music Store that will allow users to purchase and download tracks to whatever device they’re using.

The service is being rolled out to various Microsoft-powered devices over the coming month. It will first become available on the Xbox on October 16, when Microsoft does its next Xbox Live update. When that happens, its existing Zune music store will disappear and be replaced by Xbox Music. On October 26, it will become available through Windows 8 PCs and tablets. And it will be introduced on Windows Phone mobile devices shortly thereafter.

Microsoft plans to make Xbox Music apps on other platforms, like iOS and Android, but apps for those devices won’t arrive until later. It’s also planning to build a web app, which will give users access to all of the same music and features from a web browser.