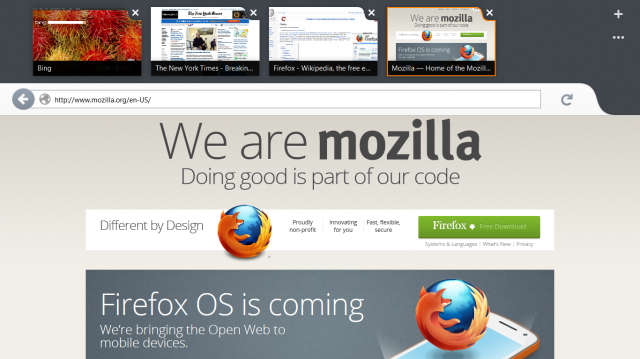 With the official launch of Windows 8 just around the corner, Mozilla today unveiled its first preview release of Firefox Metro. The Metro version of Firefox, Mozilla says, was “designed from the ground up for Windows 8? and already includes many of the usual Firefox tools and features. Despite the fact that this version is called “Firefox Metro,” this version runs in both the old-school Windows desktop environment and the Metro/Windows 8-style environment.

The browser is available for download now and will have its own nightly update channel. These updates will be handled by Desktop Firefox. Just like the desktop version, Firefox Metro supports Firefox Sync, but the team obviously also added a number of Windows 8-specific features. These include support for Windows 8 charms, for example, as well as better support for touch and swipe gestures, the Windows 8 on-screen keyboard, data sharing between Metro apps, and the ability to quickly move between Metro and desktop mode thanks to the browser’s built-in “view current page on desktop” functionality. You can find a full run-down of all the features here.

For the time being, it’s worth noting, Firefox Metro does not support Flash yet, though Mozilla says it has plans to support it and already lets you enable windowless plugins manually. Also currently missing is the ability to install add-ons. While those should arrive on Firefox Metro at some point in the future, they likely won’t be included in the first stable release, either.