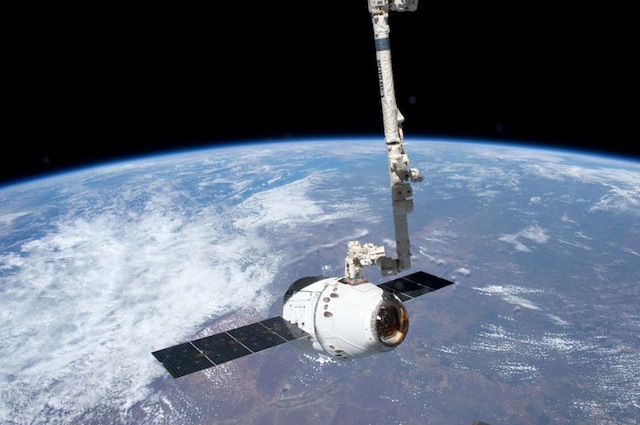 In the annals of geeky space experiments, it’s going to be hard to top this one.

NASA and the European Space Agency announced Thursday that it had successfully tested a new kind of communications protocol — the backbone of a future interplanetary Internet. And how had it tested it? By having the International Space Station commander remote-control a LEGO robot back on Earth.

“The experimental [Internet] we’ve tested from the space station may one day be used by humans on a spacecraft in orbit around Mars to operate robots on the surface, or from Earth using orbiting satellites as relay stations,” said Badri Younes, deputy associate administrator for space communications and navigation, in a statement.

The communications protocol they used is called DTN, for Disruption Tolerant Networking. On Earth, our regular Internet splits up the data you need into packets, then routes those packets to the nearest working node to make sure it gets to you.

That’s great for the surface of a planet, where you can put machines all over the place and generally assume there’s always going to be one working. It’s not so great for the vast distances of space, where you’re going to have to rely on a long, thin supply chain of data.

That’s why “DTN accounts for disconnections and errors,” NASA says. “Data move through the network ‘hop-by-hop.’ While waiting for the next link to become connected, bundles are temporarily stored and then forwarded to the next node when the link becomes available.”

NASA and the ESA’s experiment was designed to simulate a situation where astronauts might be in orbit around the Moon, or Mars, controlling a robot Rover (like Curiosity) on the surface. Coincidentally, rumors surfaced Thursday that NASA is planning a mission where astronauts orbit the Moon at a great distance, and practice sending down Rovers to the surface.