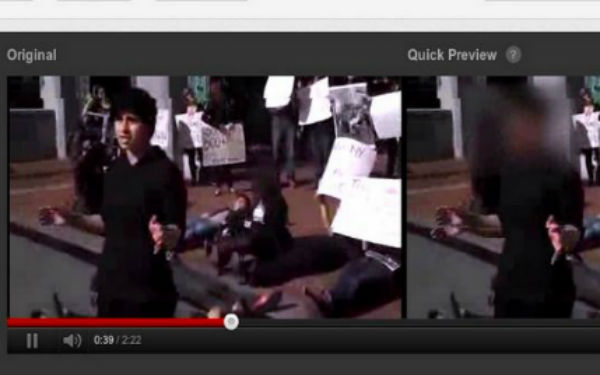 YouTube is chock full of videos where lighting and camerawork make it hard to figure out who’s in the clip. Now YouTube is giving video creators the ability to make it even harder to identify people.

Youtube has rolled out a face-blurring tool that’s supposed to let video makers automatically obscure the faces of everyone in their clips. YouTube offers a number of reasons why you’d want to do this, like protecting the privacy of kids at a basketball game.

But it seems most intent on presenting it as a human rights tool: A blog post suggests that the feature could be used to “share sensitive protest footage without exposing the faces of the activists involved.” An accompanying screengrab shows the tool in action for a “Demonstration for Egypt” event. YouTube takes pains not to promise total protection. It describes the tool as a “first step towards providing visual anonymity,” and goes on to explain that the tool may not work at all in some cases, “depending on the angle, lighting, obstructions and video quality.”

It’s still interesting to see the company offer any kind of service that makes it easier to duck a camera’s gaze. Because much of the tech world, including Google itself, is spending a lot of time on visual recognition tools, like “face-finding” features.