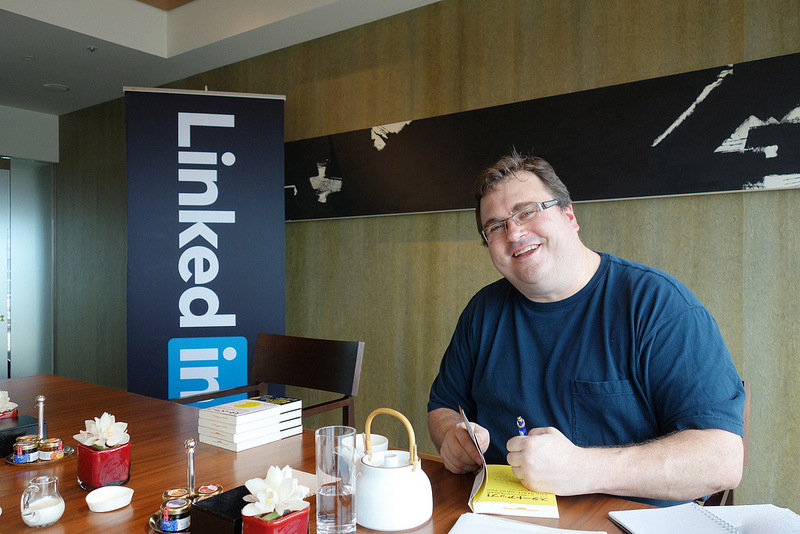 Overhaul the Degree Not just the Instruction – Reid Hoffman Plenty of startups — from massive open online course (MOOC) providers like Coursera and Udacity to adaptive learning companies like Knewton to the “online Ivy” Minerva Project — want to rethink it means to get an education. But bigwig Silicon Valley investor Reid Hoffman wants entrepreneurs to go one step further and upend the college degree.

In a post on Linkedin and The New Republic, the prominent investor and LinkedIn co-founder argues that the way to really make higher education more affordable and effective is to reimagine certification.

“To do this, we need to apply new technologies to the primary tool of traditional certification, the diploma,” he wrote. “We need to take what now exists as a dumb, static document and turn it into a richer, updateable, more connected record of a person’s skills, expertise, and experience. And then we need to take that record and make it part of a fully networked certification platform.”

For the majority of employers, a college degree is the baseline requirement. But, Hoffman argued, at a time when the skills the market needs are continuously changing and professional development and lifelong learning options are exploding, that position is becoming sorely outdated.

Given his connection to the world’s biggest professional networking site, it’s not surprising that he wants a LinkedIn-like profile to replace the diploma.

By some estimates, almost half of college students have never used LinkedIn. But last month the company announced a big move to court universities and students as young as 14 years old. And it’s not hard to imagine a world in which kids who were raised on Facebook might take more pride in an online educational and professional profile than a piece of paper that just hangs on a wall.

In his post, Hoffman singled out Mozilla (where he is on the board of directors) as one organization pioneering a new approach to credentialing with its Open Badges initiative. Announced about two years ago and launched earlier this year, the program lets people earn badges for skills acquired on and off the web and then gives them a way to share their achievements on social networks, job portals and other websites.

But Hoffman isn’t the only one thinking up ways to displace the degree and the non-profit Mozilla isn’t the only group that’s made some headway in getting it done. As MOOC providers like Coursera and Udacity attract more students with online courses offered outside the traditional university setting, many thinkers, entrepreneurs and investors have talked of the “unbundling” trend in education. Investor Fred Wilson, for example, has also identified credentialing as an area of interest for his firm Union Square Ventures.

But Degreed.com, a startup launched by a member of the founding team of ed tech company Zinch (which later sold to IPO-bound textbook rental site Chegg), comes closest to matching Hoffman’s vision of technology-driven credentialing. Its slogan (“jailbreaking the degree”) lines right up with Hoffman’s goal of “disrupting the diploma” and its service is very similar to the design specs he lays out.

As Hoffman noted, a shift to new models of certification is going to take some time. As “dumb” as paper diplomas may be, they have hundreds of years, powerful institutions and entrenched cultural norms on their side. But it looks like momentum is building behind disrupting the degree and it will be interesting to see how active a role LinkedIn plays in their undoing.