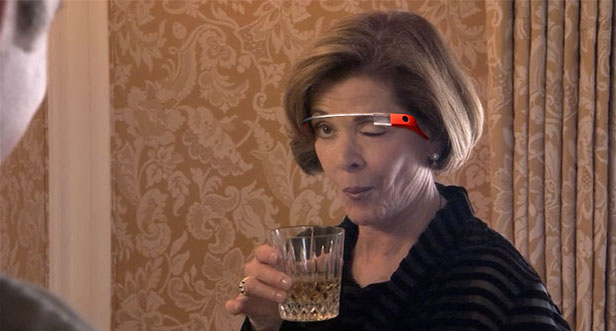 Pictures With a Wink in Google Glass? If you were thinking that seeing someone wearing Glass was awkward enough, imagine someone sheepishly winking at every interaction—in the middle of sentences, while you’re eating, driving down the road.

It will definitely lead to some odd exchanges—I’d love to hear the explanation from the person wearing Glass.

Will it change the way we perceive human behaviours?

A coy wink might be all it takes to snap a picture with Google Glass. A code found in the company’s Glass companion app for Android has revealed the wearable tech will have the ability to recognize when a user winks. Instead of telling it to snap a picture with your voice, simply wink and that’s it. It’s never been so easy to take a picture of your dog.

The user interface for Google’s forthcoming tech specs, aka Google Glass, may feature a two-fingered salute and a wink.

The source for this supposition is a Redditor by the name of Fodawim who says he or she has peered into the code of the Google Glass companion app and found the following text:

Fodawin’s hypothesis is that Glass offers users the chance to zoom windows with a two-fingered gesture and take photos by winking.

There’s no telling if Fodawin’s analysis is correct, but the two finger zoom certainly sounds feasible if one revisits TED talk on the “Sixth Sense” interface developed by Pranav Mistry, a computer scientist who also devised a blink-driven interface for a robot.

Mistry has since joined Samsung, an entity hardly shy of lawyering up when it feels its intellectual property has been inappropriately appropriated. We’re drawing a long bow here, but might Glass be in legal strife before it even emerges?

People are just beginning to get their hands-on Google Glass, so it’s still unclear how the technology will change the landscape. The potential is there, but the execution has to match. That will ultimately determine whether or not the wider consumer market will scoop up the $1,500 technology when it hits mass market, some time early next year.