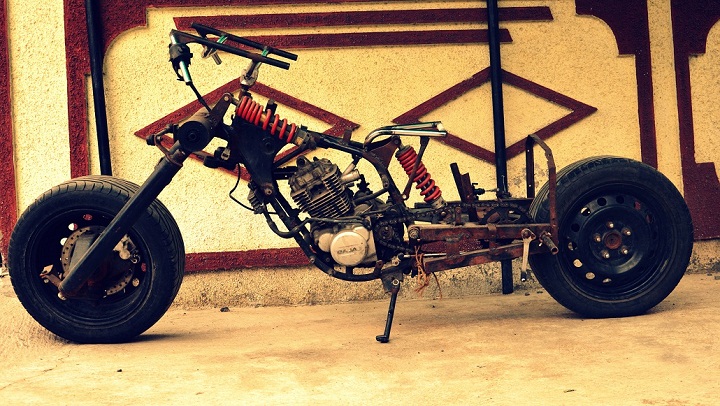 Alfred (The Butler): “Will You Be Wanting the Bat Pod, Sir?”

Bruce Wayne: “In the middle of the day Alfred, not very subtle.”

“It’s a two-wheeled vehicle, but it’s definitely not a motorcycle,” Chris Nolan says about the Bat Pod. “In essence, the Bat Pod is to the world of motorcycles what the Tumbler is to the world of cars.” The original Bat Pod was conceived in Nolan’s garage by himself and production designer Nathan Crowley. With little to go on but an idea, Nolan recalls thinking, “Let’s just go for it. Let’s build it full-size.” So they did.

I guess everyone who watched The Dark Knight and The Dark Knight Rises movie is smitten by the tech our protagonist shows off in the movie. And having such a bike being build in India is a huge thing indeed! There is one person who got smitten by it too, and being a crazy Batman fan, he thought of taking the craziness to the next level.  Abhijeet Khandagale and his team from Nagpur have undertaken this massive task of building this Batpod inspired bike, they like to call it, Project Lincoln- Azrael.Following the same spirit, “Let’s build it full size”. However, these guys now need some help for their project and hence, have decided to go the crowd funding way. Let us help them with contributing as much as we can! So, what exactly is a Batpod? Well, The Batpod is a vehicle hard to be defined as a bike, featured in the Dark Knight movie as Batman’s ride and escape pod from the Tumbler i.e. the Batmobile.

The dream was started 3 years back, and through several modifications, ups and downs later, these guys have come close to realizing this dream. The bike is almost complete with the testing going on, and soon expecting a release of their test ride. The bike stands at 3 feet tall and 8 feet wide, sporting two 195mm 17” tires. The vehicle is set to derive power from a Pulsar 220cc FI engine which was salvaged from a bike wreck. The interesting thing to note about this vehicle is that it is completely built of second hand parts, and no stock parts have been used. A 100% custom designed vehicle from these engineering minds. Another notable fact is that there are just 5 replicas of this Batpod worldwide; and what sets these guys apart from them too is, they didn’t replicate it, they titled their attempt as ‘Project Lincoln: Reinventing the Batpod’ and from the pictures it is pretty much visible that they did make some re-engineering to it. The project was head by Abhijeet Khandagale and the designs were made by Ankit, the lead designer who is now studying at Academy of Arts, San Fransisco, CA and Zina Dk who is from Tunisia. The rest team was 12 member huge, who came in at various phases of the project.

These young batmaniacs, were supported by Arun Bajaj, the local Bajaj Auto dealer; Sharif Engineering Works, who helped them in fabrication; Dave Welsh from Chopper City USA and Mehul Gohil from Official TDKR Community, who gave in important ideas during the process.

These young Crusaders need your help. They recently launched a crowd funding campaign, and have raised $500 so far, and the campaign is active until 3rd May, with a target of $10K.

If the batpod intrigues or inspires you, support the project by donating or sharing the word.

Always remember, Anyone can be Batman!