We saw Cashback making a big buzz in the UK and thought that it could be an interesting venture to start off with. Both of us come from a finance background, so our initial months were spent trying to learn as much as we could about e-commerce and the Cashback industry as a whole. In 2011 we not only launched our first UK website, Pouring Pounds as mentioned above but also developed 4 white labels for the same. In 2013, seeing the success of Pouring Pounds we decided to introduce the Cashback concept in India and launched it as Cashkaro.com which has now completed a year and is up an upward growth trend!

It is wise to spend time on websites that can give you discounts on their platform. Atleast we can guarantee that you can get high class discounts in CashKaro. CashKaro are India’s coupon and cash back website. There are so many ecommerce partners and you can easily hover around them in the homepage itself. Next time you think of purchasing something online, goto CashKaro.com and you can easily save some valuable bucks. [pullquote align=”right”]Both our families had successful entrepreneurs and they were supportive enough to let us start our own venture and helped us in achieving this feat. Together as a team we have reached the top spot and we aim at consolidating this position.[/pullquote]Cashkaro was started after the success of 2011 UK based Cashback & Couponing company – Pouring Pounds (a Swati and Rohan foundation). Rohan & Swati met at and graduated from London School of Economics in Mathematics & Economics Honours. On graduating, while Rohan worked in the hedge fund/asset management industry in London for 8 years, Swati joined Goldman Sachs and worked in the Investment Banking Division & Executive Office for 5 years before finally setting up Pouring Pounds first and later expanding to India with Cashkaro.

[pullquote]We serve close to 1.75 lakh users with over 1000 authentic transactions on a daily basis. Unlike other similar players in the Indian Cashback sector, Cashkaro is the only one to have managed a raise of $750,000 in July 2013. Our USP lies in providing our members with MAXIMUM SAVINGS on all online shopping[/pullquote] Cashkaro was launched a year ago in April 2013. The concept of cashback is new to India. Both Cashkaro & Pouring Pounds are by far the largest websites offering Coupons as well as Cashbacks on every purchase a user makes on various online retailers. When asked about their funding, Swati and Rohan invested personal funding to set up and run Pouring Pounds and later went on to raise $75,000 seed funding in October 2012 at the London Business School Angel investors event.

All talks aside, What makes CashKaro stand aloud in the crowd? Other website offers coupons, but CashKaro offers Cashback! So by now you must have known why the name “CashKaro”. CashKaro is tied up with leading and heavyweights of India like Flipkart, Amazon.in, Myntra, Jabong, Yatra..and the list goes with 500 more such online retailers.

[pullquote align=”right”]”Lack of seed funding in India was an issue we faced initially as investors wanted to put in money only after you start making money. However, we overcame this challenge with initially investing our own money and later raising $750,000 as funds” says Swati.[/pullquote]Chasing retailers to pay commission on time was also another challenge for Swati and Rohan. Hooking up with the retailers takes a little business time, Rohan and Swati faced this challenge but now there is a fruitful relation between their retailers as well as customers.

We already saw these stumbling blocks from CashKaro, but to us it seems there near future plans are not shiney as CshKaro is already booming and established well in India. And that is what Swati said: we aim at continuing as the top Cashback and Coupons site in the business.  We aim at increasing our user base and to increase the gross revenue generated to over $30 million. Currently, CashKaro is not having any mobile app, so that might be the next move.  Also, increasing partners/retailers will be an evergreen future plan for CashKaro.

Cashback sites in the UK & US are making over $100m in revenues. With the huge ecommerce growth in India, Cashkaro is set to do the same & is pioneering this concept in India. CashKaro has already been in press be it radio or online. CashKaro outmuscles Mydala, Flip!t, couponzguru or coupondekho at every position. Without any doubt, they are going to bloom ahead too. Can they become the world’s largest coupon website? We’ll have to wait and watch for that.

Bookkida: Why Throw Away, When You Can Sell ? 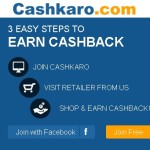