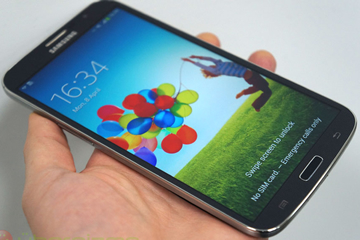 Samsung on Tuesday launched Galaxy Mega 5.8 and Galaxy Mega 6.3, its biggest smartphones so far in India. The company, encouraged by the sales of Galaxy Note, which has a screen size of 5.5-inch, believes that in the developing countries there is demand for oversized smartphones that can also double up as tablets.

As their names suggest, the new Galaxy devices have a screen size of 5.8-inch and 6.3-inch. While the smaller of the two Galaxies has an MRP of Rs 25,100, the bigger one is priced at Rs 31,490. Samsung said that Galaxy Mega 5.8 will be available in the market within a week while Galaxy Mega 6.3 will reach shops in the middle of June. Mega 5.8 is powered by a dual-core processor running at 1.4GHz and has 1.5GB RAM. The internal storage is limited to 8GB (user accessible storage is just 4.78GB) but there is a microSD card slot through which users can add up to 64GB storage.

The device has a screen with a resolution of 540x960pixel, which is below average considering many smartphones with 5-inch screen nowadays use a 720x1280pixel resolution. The primary camera can shoot images in up to 8MP while the front camera is limited to 1.9MP. The battery capacity is 2600 mAh.
Galaxy Mega 5.8 weighs 182gram. It runs the latest version of Android – Jelly Bean 4.2 – that has been modified by Samsung using its Touchwiz user interface.

Mega 6.3 is powered by a dual-core processor running at 1.7GHz. It has a screen with 720p resolution and 16GB internal storage, of which around 10.51GB can be accessed by users. It has 1.5GB RAM, 8MP primary camera and 1.9MP front camera. The device uses Android 4.2 (Jelly Bean). It weighs 199gram, making it one if the heaviest Android smartphone ever. The battery capacity is rated at 3200mAh.

“Consumers in India are preferring the larger screen displays in their smartphones owing to the time they spend doing more with their devices,” said Vineet Taneja, head of Samsung’s mobile division in India. “Galaxy Mega meet the varying lifestyles of our consumers.”

Honestly, we are not great fans of huge devices. After all, these are cell phones, right? The basic requirement is that these should be easily pocketable and of course easy to handle and use.

In terms of size, Samsung claims that both devices are pocketable. But we are not really sure about that claim. Both devices are too big to be carried in jeans pockets. Mega 6.3 is especially big, though it should appeal to people who have to carry a 7-inch tablet and find it too big.Overall, the design is pretty similar to what other Galaxy devices look like. If you are a Galaxy fan and if you love large screens then Galaxy Mega is for you.