One of the India’s prominent online marketplaces Snapdeal.com  raises $133.7 Million, in a funding round led by eBay, as reported by LiveMint. EBay led the new round of funding in Snapdeal, raising its stake in the company following an initial investment made in 2013, eBay said in a statement.

In 2013, eBay lead the first funding round that resulted in an investment of $50 million. This round has seen participation from all of Snapdeal’s current Institutional investors including Kalaari Capital, Nexus Venture Partners, Bessemer Venture Partners, Intel Capital and Saama Capital. With this investment, eBay has increased it’s stakes in Indian E-Commerce market.

With the competition heating up between E-Commerce giants such as Flipkart, Myntra , Jabong and Snapdeal, we find Investors increasing their stakes hoping these companies return grandly. The market leaders, Flipkart, Myntra and Jabong, have all raised between $50 million and $360 million over the past eight months or so.

The e-commerce market is worth $3.1 billion and is estimated to grow to $22 billion in five years, according to a report by CLSA in November. With Amazon entering the Indian e-Commerce market and all the major players raising funds, this space remains an interesting once to watch. 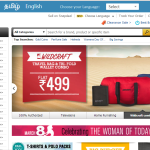