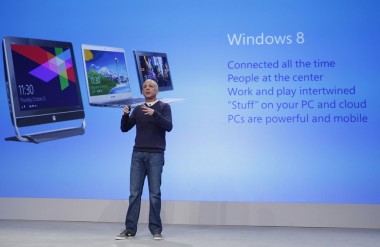 With Windows 8, Steven Sinofsky said that Microsoft and its PC-making partners have found a way to deliver modern computing at a price far less than that fruit-named competitor. He notes that there are full-featured Windows 8 laptops that sell for $279.

“These are fantastic machines,” Sinofsky said Thursday, shortly after presiding over the Windows 8 launch. They’re not netbooks or bargain-basement machines. At that price, he said, you can get a computer good enough to last a student through college.

Windows 8, which officially went on sale Friday, is a huge bet for Microsoft, which aims to offer an operating system flexible enough to compete with both Macs and iPads, as well as satisfy the hundreds of millions of existing Windows PC owners at homes and businesses around the world.

The software features a new built-in store to buy apps, is optimized for touchscreens and runs on chips designed for PC processors as well as chips traditionally used in phones and tablets.

Sinofsky said he is very pleased with the range of computers produced by the likes of Acer, Lenovo and Dell. He notes there are tons of thin, light, touchscreen Ultrabooks that sell for hundreds less than a MacBook Air.

As for the Windows RT variant, which uses more power-conscious ARM-based processors, but can’t run older programs, Sinofsky said it will hold a lot of appeal.

“It really is a PC for everyone,” he said, joking that the market is limited to those who are either right-handed or left-handed. “Is it for everyone all the time? No.”

Some people, he said, want or need to run older Windows apps, and Windows 8 machines will be fine. But, he said, while an iPad might be good for a short trip, a device like Microsoft’s Surface can suffice even on a long business trip.

Apple CEO Tim Cook took his own shots at Microsoft on Thursday, suggesting that Surface makes too many compromises in trying to serve as both PC and tablet.

“You could design a car that flies and floats,” Cook said on Apple’s earnings conference call, “but I don’t think it would do either of those things very well.”