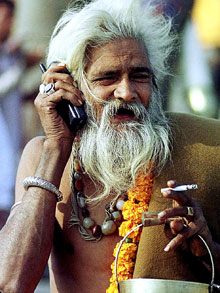 The World Will Soon Have More Phones Than Humans

There are more than 6 billion mobile subscriptions today. But that number “will soon exceed that of the human population,” according to a new World Bank report.

It was only 12 years ago that there were less than 1 billion mobile subscriptions worldwide. Today, three-quarters of the entire population has access to a mobile phone.

Subscriptions in low and middle-income countries increased by more than 1,500% between 2000 and 2010 — from four to 72 per 100 inhabitants. (Keep in mind that in many countries, it is common to have more than one SIM card.)

While voice is still the primary use for mobile device, texting comes in at a close second. Nearly 5 trillion text messages were sent in just 2010 alone. Those 160-character snips accounted for 80% of operator revenue — that’s a whopping $106 billion.

But while the wildfire-like spread of mobile is notable, the big story is who is using the technology and where.

It’s the younger generation that’s driving mobile sales in developing countries. Those under age 15 make up 29% of the population in low- and middle-income economies, compared to just 17% in high-income nations. The report notes that these developing countries are “growing richer, so more consumers can afford to use mobile handsets for more than just essential voice calls.”

This is huge for developing nations because, the World Bank notes, it creates “unprecedented” opportunities for employment and education.

As expanded technology drives down the price of mobile devices, networks are doubling in bandwidth nearly every 18 months, expanding into rural areas. That means more Internet access and higher app downloads. Those applications, the study says, empower individual users and “boost the economy as a whole.”