Recently, the US President Donald Trump signed a bill to create the new foreign aid agency, the United States International Development Finance Corporation. With his blessing, companies that want to do business in developing nations can now obtain USD 60 billion in loans, loan guarantees, and insurance. The move is another outcome of the US-China trade wars, that aims to counter China’s growing geopolitical influence. The move could mean a phase of infrastructure projects starting in Africa, Asia, and Latin America.

China has been seeking greater global influence by financing big projects across Asia, Eastern Europe and Africa, for years now. As this tennis match carries on between the super powers, what does it mean for India? Creation of a dedicated finance pool like the United States International Development Finance Corporation could mean good news for India.

400+ Business and Govt. Leaders Will Convene at the Horasis Asia Meeting 2018 in Binh Duong New City

After all, India and China are great competitors in Asia, both from a geopolitical and economic point of view. The Asia-Africa Growth Corridor (AAGC), initiated by Prime Minister Narendra Modi and his Japanese counterpart Shinzo Abe, is widely seen as a rival to China’s Belt and Road Initiative (BRI), because of overlaps in the regions they cover.

The BRI, also known as the One Belt One Road (OBOR) or the Silk Road, is an initiative on part of the Chinese government to engage in infrastructure development and investments in countries in Europe, Asia, and Africa. On the other hand, the AAGC is an economic collaboration between the governments of India, Japan, and multiple African countries, which also aims for infrastructure development in Africa through Indo-Japanese collaboration, including digital connectivity, to create a free and open Indo-Pacific Region.

Horasis Chairman Frank Jurgen Richter says that the Corridor offers more to Africa rather than as a rival to the Chinese BRI, and that is how it should be sold to potential partner countries. He reasons that Tokyo and New Delhi can both benefit from helping Africa, since Japan is a resource-poor nation and India, though resource rich, has a vast population to deal with. 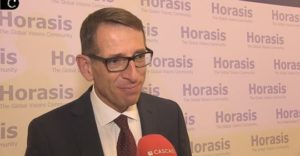 “Africa is a tempting alternative source of oil, gas, and minerals. The prospects for open cooperation in Africa between China and its two Asian rivals may be small. However, complementarity can be achieved without the need for top-level agreements that both sides might find unattractive. All that is really needed is an absence of conflict. Beijing, Tokyo, and New Delhi do not need to work together, but India and Japan would both benefit from an approach that would avoid conflict with China,” he says.

Horasis recently organised its Annual China Meeting in Kyiv, where the ongoing trade-war between China and the US was one of the main topics discussed. “The US-China Trade War has no winners. It is a lose-lose scenario, which will also impact countries like India, which are gradually opening up their own markets. The last thing India needs is a relapse into protectionism,” Richter says.

The Horasis Asia Meeting, which is scheduled for this November in Ho Chi Minh City, Vietnam, is expecting a gathering of prominent government and business leaders from ASEAN countries as well as the rest of Asia, where ideas and investors can participate.

While Indian growth has been sluggish for years, performance is now showing. Still, India struggles with an emerging-markets crisis, with the Rupee under pressure, similar to the fall of the Turkish Lira, but as Richter says, “Of course, there are always question marks to economic growth, but long-term, I think the outlook for the Indian economy is quite good, with a lot of entrepreneurship happening.” Interestingly, the Rupee’s devaluation is a likely consequence of the US-China trade war.

As India awaits elections, investor speculation is expected. According to Richter, the country can expect high investments post-election. “I personally believe that investment might be even stronger after the election, once it is determined who will be in power for the next four years,” he says. As tax evasion decreases, the Indian economic picture looks positive. “India is on the right track for economic growth and will become the new growth engine for the whole world,” he adds.