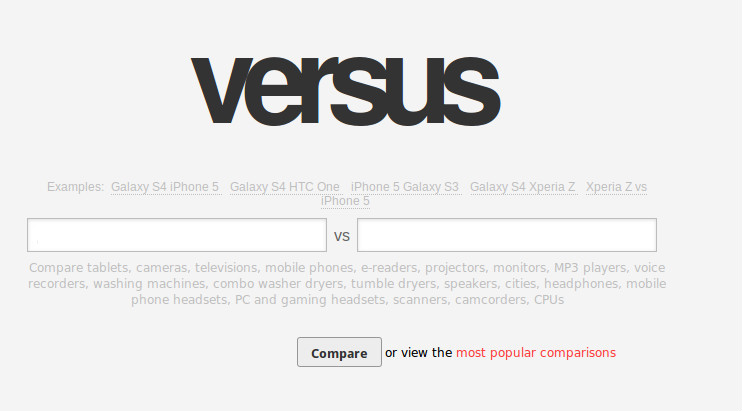 The Berlin-based startup that lets users “compare anything” is looking to hire a hell of a lot of new staff.

Big hires usually mean big news, and this time’s no different. Ramin Farr, chief executive and founder of Versus, confirmed there will be a some major announcements soon. While he steered clear of details, he told us we can expect a new version of Versus to be launched in Q3 this year — it’s been nicknamed Project Vegas and is already in testing. He told that he wants new platform to be the “Wikipedia of comparisons.”

“It’s not a feature, it is really something big we are building,” Farr said. “Here’s an example of what it will do: Let’s say you want to relocate. So you’re in Berlin and the next place you would go is New York or London. And you can’t decide because both are great cities, have lots of career opportunities and really smart people. Versus will provide the best information on why you should pick one. No other site will provide the data we do. We will bring in a new feature that will enable this data that no one else has,” Farr told us.

The mysterious new version will allow Versus to “dominate the market of comparisons by offering the best, most accurate and comprehensive content” — which explains why they’re on a hiring binge. Versus is also about to launch a mobile web app, plus will be adding new comparison verticals – in the next few weeks they’ll host universities and an “exciting category in medical testing no one is doing yet,” Farr said.

Will there be an Intern dominated Task Force?

What did strike us is that, out of the 47 job posts, 34 were for interns to work as content managers in a number of different areas, from universities to real estate. They’ll have to gather the information the site needs to make accurate comparisons. When asked Farr whether he thinks the ratio of interns to employees is an issue, he was quick to emphasize that the core positions are not given to interns.

He also said that the interns are likely to take on more than one role. For example, the intern in charge of content management for motorcycles might also do scooters. This means it’ll actually be more like 20-25 new interns being hired, not 34.

Whatever Versus has planned for the future, it has already managed to secure solid financial backing, in May it announced a €2.8m funding round from Earlybird Venture Capital and angel investors Dave McClure, Lars Dittrich and Dario Suter. The company launched in 2012 with seed funding from Dave McClure’s 500 Startups and other investors including HTGF and JMES. Whatever’s planned, it’s looking like a pretty ambitious endeavour, so we’ll keep you posted when we hear more.