Without Social Media, 18% Of Teens Would ‘Stop Communicating’

18% of teens would stop communicating altogether if their favorite social networks shut down. That’s according to a recent survey of American high school and college students by email marketing company AWeber.

According to the survey, 90% of teens are on Facebook, and an astounding 93% of teenagers use mobile phones -– the same amount that use email. 74% of teens are YouTube users, and 47% use Skype to keep up with others.

Facebook and Email own almost equal parts of teens’ hearts. With teenagers going for both when they wake up in the morning, while they’re in class, and even while they’re on vacation.

6% of teens thought they might replace their cell phones with a landline or writing more letters if mobile phones suddenly became unavailable. A whopping 18%, however, thought they would stop communicating altogether if their favorite channel of communication disappeared.

Check out the infographic below for a closer look. What would you do if your favorite social network suddenly closed? Let us know in the comments. 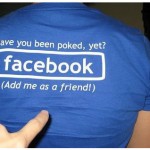 Without Social Media, 18% Of Teens Would ‘Stop Communicating’