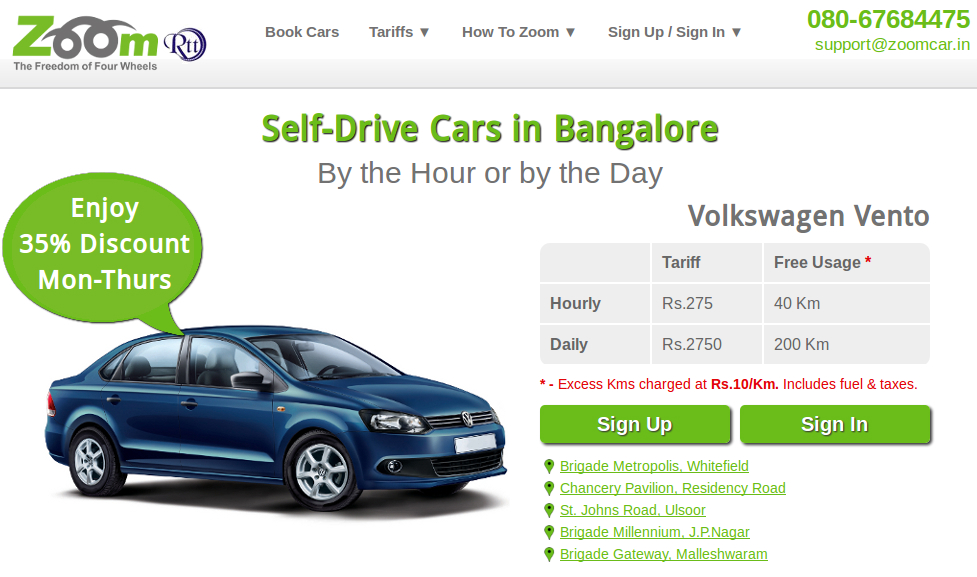 ZoomCar Raises $1.6 Million in Funding – Wants to become the “ZipCar of India” Roads of India are filled with cars, rickshaws, scooters, people, animals, and merchant-stalls, and no-one stays between the lines.

For those people brave enough to drive their own vehicles through the chaos, ZoomCar.in is there to help.

The company has raised $1.6 million to be the “Zipcar of India.” It offers a neighborhood-based, membership-only car rental service by hour or by day.

Co-founder David Back said that the Indian car rental industry is worth $3 billion and growing fast, but most car rental services are primarily focused on chauffeur-driven rentals. Meanwhile, car-sharing is flourishing around the world thanks to companies like Zipcar, Uber, Lyft, China’s eHI, and the like.

Zoom’s founders saw an opportunity to bring this model to India.

“Each car-sharing vehicle replaces an average of 15 private vehicles on the road,” Beck said in an email. “That means less traffic and air pollution, while at the same time extending the freedom of car use far down the income ladder.  The impact is actually much higher in the developing world, because it’s much easier to persuade people not to buy a car in the first place than it is to convince people to give up car ownership.

A small percentage of people in India actually own cars. Owning a parking space is expensive and people rely on public transportation, walking, and taxis to get around. The country is filled with densely populated with urban centers, which Beck said makes it well-suited for this type of business.

People can book and pay for cars through a smartphone app, and in-car GPS systems maintain fleet security. Drivers can also receive navigation and parking help.

Zoom is currently active in Bangalore with a fleet of 52 vehicles. Beck said that the demand for its Zoom cars has grown dramatically and outpaces supply by a wide margin. This financing will help purchase more cars.

New York City-based Empire Angels led this round, with participation from online VC FundersClub, and elite angels including Larry Summers and Lady Barbara Judge. It also has partnerships with car manufacturers Ford, BMW, Volkswagen, and Mahindra.