As 3D printing is transforming many industries, India will benefit greatly should entrepreneurs decide to further pursue this disruptive technology.

One of the key areas where 3D printing has not truly met its potential is within the startup scene in India.

India is the fourth largest startup hub in the world, yet many argue that improvements need to be made regard the use of low cost 3D printing. According to Indian Startups 3D’ing and Think3D attribute India’s slow adoption of 3D printing in the startup industry to lack of awareness.

Additionally, individuals are not ready to pay the premium that comes with 3D printing and very few people understand that 3D takes a lot longer than printing with paper. This process can take anywhere between 30 minutes to several hours depending on the project.

Our ability to create whatever we desire within this industry is only limited by our imagination. Many see 3D printing as a fantastic tool to help improve our lives, others have taken different routes and dabbled in more controversial areas such as the 3D production of firearms.

Likewise, researchers at at ETH Zurich have harnessed the power of 3D printing to produce an artificial silicone heart. According to the Swiss group this is “the first entirely soft artificial heart”.

This is not the only medical breakthrough using the diverse abilities of 3D printing. We have also see advancements of more affordable HIV test kits and some students have even used 3D printing to prevent the spread of malaria, Zika and other dangerous diseases. The discoveries and potential within this field are quite literally life changing.

However, one country which has arguably not seized the true potential for this technology is India. Considering India is one of the fastest growing economies in the world, which is currently expected continue, it is surprising they are not currently doing enough with 3D printing.

“There are a lot of misconceptions about what can and cannot be done with 3D,” said Tanmay Shah, head of innovations at Mumbai-based 3D printing company Imaginarium in an interview on The Hindu. Shah also stated that Indian markets need to be familiarised with the process to make it more mainstream.

Many 3D printing startups, such as 3D’ing, run regular classes to educate their customers on the possibilities and opportunities using 3D printing. The idea is to spread the word and give customers a greater insight into the potentials and benefits of using this type of technology.

“The advantage of 3D printing is its cost-effectiveness. 3D printing provides promising growth opportunity for new entrepreneurs but they should be patient to see rewards and passionate about the technology,” said Srinivasa Prakash Regalla on The New Indian Express. Prakash Regalla heads-up research on ‘manufacturing artificial limbs using 3D printing technology’ at the BITS Pilani Hyderabad campus.

There are Indian industries currently making use of 3D printing such as medical, industrial and the automotive industry. Due to the popular use of 3D printing in Indian plastic surgery doctors have been able to make incredible breakthroughs.

For example, Doctors in India have successfully given a Ghanaian man new genitals who currently reports of having a “good sexual life”. The patient chose to seek help in India due to the advice of his doctor in his own country.

However, some companies are looking forward to the potential of 3D printing. H Bots Robotics, an Indian based robotics company, has raised $1 million in funds, which it will be using to launch Makers Leeway, a robotics lab in Hyderabad. The lab will allow entrepreneurs and startups to experiment with robotics using multiple tools such as 3D printing.

Entrepreneurs in India may be slow to adopt this versatile technology now; however, once the ball starts rolling we are likely to see some big advancements within this industry. 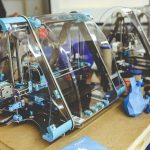