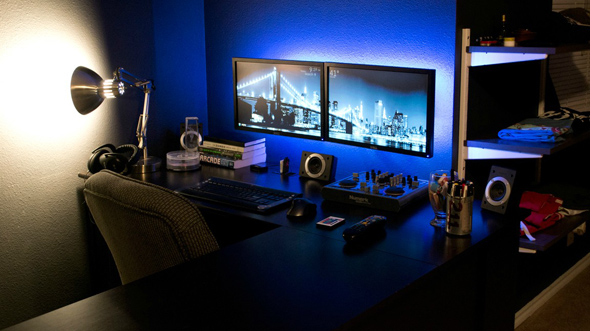 6 Interesting & Exciting Workstations From All Over The World

Suppose you have a long thesis paper that you need to write for school, or you have a number of reports that need to be finished for work, or you just have a lot of computer-related activities to do. Would you rather do all of that in a ragged room of splintering walls, chipped paint, and moldy ceilings? Or would you prefer a clean, well-maintained room with proper furniture?

About 99% of you would prefer the latter – a calm, orderly, and comfortable environment. The other 1% are masochists with a penchant for suffering. In the end, the actual work being done is the same, but we often forget about the importance of a well-kept workstation.

In this article, we’ll show you a number of interesting and exciting workstations that have transcended the typical image of a computer workstation and have entered into a sort of Workstation Hall of Fame. These examples were found on Reddit in /r/battlestations, a place where people can show off their workstations to one another.

Submitted by poisondwarf, this workstation impresses me due to one particular aspect: the minimalism. When you boil it down, it’s nothing more than two desks that have been joined in the corner of a room. But everything about it is so clean and calming. The lack of any visible wiring is especially worth a round of applause.

This is mrjoey35’s home office and it is quite a sight to see. The perpendicular desks create a “this is my workspace” feel and provide a lot of room for hands-on work. But on top of that, the blue lights coming out of the back of the monitors adds a sort of ambience that makes it feel just enough like home. This is a station that has been optimized for work efficiency and psychological comfort.

In recent years, there’s been a surge in popularity regarding portrait monitors (as opposed to the standard landscape monitor). Here, dopamean shows what it looks like to have three portrait monitors together. It might take a bit of getting used to, but I think it looks great. Plus, it’s sure to turn a few heads whenever people visit your home. The lack of clutter in this picture is just icing on the cake.

Like in the previous setup, Geglamash shows us how useful it can be to have portrait monitors. In this station, the two portrait monitors are used to control a music playlist and maintain a Steam library, while the center monitor is a standard landscape model for typical computer use. A special mention goes out to the wall-mounted headset–a brilliant solution to headset clutter.

Brobin elegantly describes this setup as his “welfare cave”, which is strange because it is a setup that I would never associate with a word like “welfare”. This picture is of more than just a workstation – it’s a workroom. As if the quadruple monitor setup wasn’t enough, he goes and fills out the rest of his room with splendor and majesty that blows my mind right out of the water. The amount of detail that went into this is stunning.

Ah, the best for last–teheranaway shows us his mind-boggling six-monitor setup that can elevate any gaming experience to the next level. His productivity levels while working must be pretty good, too, considering he has so much workspace area for multitasking. The monitors mesh together perfectly, creating one of the best battlestations I’ve ever seen.