Amazon Brings Its Videos to the iPad

Amazon has been ramping up its digital video store for years. But until now it hasn’t been able to get the videos it rents and sells onto the iPad. The app won’t work on iPhones, but other than that, it is basically an analog of Amazon’s iOS Kindle apps: You can use it to access videos you’ve bought or rented from Amazon’s store, but you can’t actually buy or rent the content directly from the app.

So this won’t help Amazon do much to market its offerings, but it adds obvious value for its existing consumers. 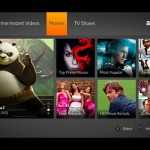 Amazon Brings Its Videos to the iPad