The price was more than double Sotheby’s high estimate and sets a new record for the collector’s item.

A memo written by the firm’s co-founder Steve Jobs when he worked at Atari sold for $27,500 at the same New York event.

The original estimate for the four-page handwritten note was up to $15,000.

Only about 200 Apple 1s were ever created. The computers were hand-built by Apple’s co-founder Steve Wozniak and originally sold for $666.66 (£426) as a fully assembled circuit board.

Only about 50 Apple 1s are still believed to be in existence. The auctioned model is one of the very few that still works.

The memo outlined ways to improve Atari’s World Cup football game
Their identity has not been revealed. The Atari memo was written in 1974 and consists of four pages detailing the late Steve Jobs’ thoughts on how to improve its arcade football game World Cup. He was 19 years old at the time. The pages include circuit drawings and diagrams showing how the paddle-based game could be made more fun to play.

How To Forward Emails in Gmail 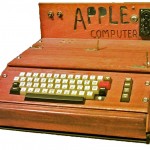