Two higher capacities of the smaller iPad will be available in the WiFi-only configuration. These will likely be priced at $100 premiums over each other at a minimum of $429 and $529.

It is possible that this base price for the smaller iPad could be higher, but our best guess is $329.

Apple’s smaller iPad will also come in a version that connects to cellular networks. Like the third-generation iPad, these models will come at a $130 premium over their corresponding storage capacity in the WiFi-only line. This comes out to likely minimum price points of $459, $559, and $659 for the WiFi + Cellular line…

When placed in Apple’s current pricing matrix of its iOS devices, a starting price of $329 makes sense. The new iPod touch will continue to be cheaper than Apple’s new tablet, while the smaller iPad’s pricing will also be nicely spaced under and between the new full-sized iPads.

This key starting price of $329 is considerably higher than the $199 entry level price of Google’s Nexus 7 and $159 price of Amazon’s Kindle Fire. However, with 250,000 iPad-optimized apps, large iTunes Music, TV Show, Podcast, and Movie collections, digital book reading and purchasing through iBooks, and Apple’s large, integrated ecosystem of other products and accessories, the premium will likely be worth the money for a lot of people this holiday season. 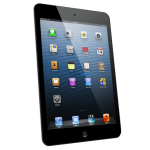