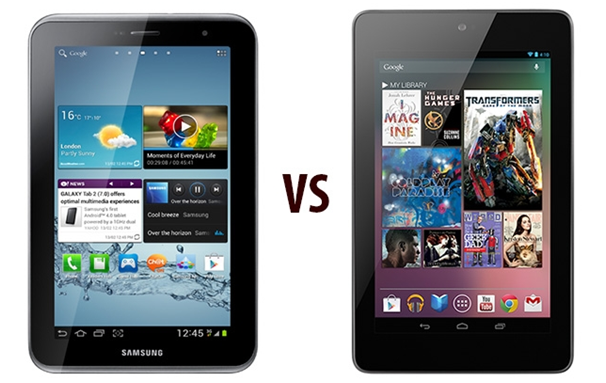 Tablets, the biggest buzz word this holiday season. Consumers want better tablets than they are demanding the smartphones. There are all kinds of tablets out there differentiating on the basis of storage, processor, connectivity, brand and operating system but the most important differentiating factor of a tablet is its screen size. Most of the tablets come with screen sizes of 7 inches, 8.9 inches or nearly 10 inches diagonally. Yes there are other screen sizes as well such as the 7.7 inches and 11.5 inches but they are not used widely. Of course Apple, which revolutionized the tablets, have their tablet devices with 2 most popular screen sizes out there; 7 inches and 10 inches. But being an Android fan, I think that Apple does not provide enough on the value for money part to the competition.

Being Indian, and going by the nature, I would like to buy the products that provide better value for my money. Today we are going to compare two of the best Android tablets in the 7 inch category; Samsung Galaxy Tab 2 and Google’s own Asus Nexus 7. In a interesting battle, Samsung is fighting with their platform partner Google this time in nearly the same price point; Samsung Galaxy Tab 2 price in India is around INR 18K while the Nexus 7 3G version sells for around INR 26K but you can import it at lower price of INR 20K. Each of them has their pros and cons but still, let us analyse on some of the important aspects of them and try to decide which is the best for users.

The design and ergonomics are one of the most important aspects of tablets because they are much heavier and larger than smartphones and they need to be as comfortable as possible when you hold them. Design wise, although Samsung Galaxy Tab 2 looks attractive and flashy in its white colour, but in ergonomics, the Asus made Nexus 7 is perfect to hold. It has a perforated back which makes it very easy to grip and it even has large bezel so that you can hold it perfectly without touching the screen accidentally.

Both the tablets have 7 inch touchscreen diagonally but they are different type of screens. The Galaxy Tab 2 comes with a PLS LCD screen while the Nexus 7 comes with an IPS LCD panel. The screen of the Nexus 7 is better when it comes to sharpness because of its resolution of 1280 x 800 pixels is higher than that of 1024 x 768 pixels in the Galaxy Tab 2. It is very useful while reading, browsing and all other things where text comes into play. The Galaxy Tab 2 has a front VGA camera as well as a 3 MP fixed-focus camera at the back but the Nexus 7 misses out on back camera giving access just only to a 1.3 MP fixed focus front camera which is enough for good quality HD video calls.

Both the devices come with nice multimedia content playing capabilities but you need additional application like MX Player on the Nexus 7 to take care of that. Samsung, as always comes up with their own version of music and video players which are probably the best in the world with support for almost all the multimedia formats and codecs. So the screen advantage goes to Nexus 7 due to sharper and better screen while the multimedia support goes to Galaxy Tab 2 due to dual cameras and multimedia playback support.

First about the processing capabilities, the Nexus 7 comes with ARM Cortex A9 based 1.2 GHz quad-core Nvidia Tegra 3 processor which also contains 12-core ULP GeForce GPU. On the other hand, the Samsung Galaxy Tab 2 has a ARM Cortex A9 based 1 GHz dual-core processor with PowerVR SGX 540 GPU. Both come with 1 GB of memory (RAM) for smooth multitasking but thanks to the quad-core processor used in the Nexus 7, it performs every task smoothly and it even has some of the games that are made exclusively for the Tegra 3 processor. Nexus 7 wins in the processing and graphics department by a wide margin.

Coming to the connectivity part, the major difference between them is the lack of 3G in the lower end versions of the Nexus 7. Only the 32GB version has the SIM card slot which can be used only for Internet connectivity while the Galaxy Tab 2 can be used as a full-fledged phone as other than using it to connected to Internet, you can even text and call through it. The Nexus 7 even lacks the storage expansion slot while the Galaxy Tab 2 has it which can be used to expand the storage from internal 16 GB to an additional 32 GB.

Although the Asus made Google Nexus 7 is better in the terms of processing/gaming performance, screen quality and OS upgradability but it misses out on some of the most important features in the sense of missing back camera, storage expansion slot and 3G in lower end models. The choice depends upon the user preference, if the user wants back camera and 3G enabled tablet in cheap pricing, there is only one choice of Galaxy Tab 2. If those are not important criterion then Nexus 7 emerges as the best tablet by a wide margin.